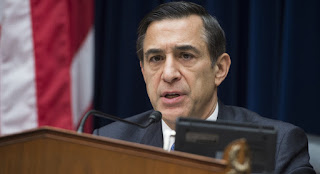 As Der Trumpenführer steps up his attacks on the press for reporting on his campaign's possible collusion with Russia - treason by another name - and limits access to certain press outlets, GOP Congressman Darrell Issa (who I generally view as despicable) called for a special prosecutor to oversee the investigation of Trump-Russia ties.  Paul Ryan and Mitch McConnell has pushed to quash the appointment of  a special prosecutor in what can only be deemed an effort to hide the truth, so Issa's move cannot be welcomed by either Der Trumpenführer's regime or those in the GOP trying to keep the truth from the American Public.  Politico looks at this surprising move by Issa.  Here are excerpts:

A Republican congressman who aligned with President Donald Trump during the 2016 campaign called Friday for a special prosecutor to oversee the investigation into Trump associates' contacts with Russia.

"You cannot have somebody, a friend of mine Jeff Sessions, who was on the campaign and who is an appointee," the California Republican said in response to a question from host Bill Maher. "You're going to need to use the special prosecutor's statute and office to take — not just to recuse. You can't just give it to your deputy. That's another political appointee."

Issa emphasized that "there may or may not be fault" with Trump's associates but said Russian President Vladimir Putin's brutality toward political enemies highlighted the need for such a probe.

Issa supported Trump during the 2016 election, a fact that Democrats exploited in an attempt to topple Issa in his bid for a ninth term in the House. Issa prevailed by less than a percentage point, and Democratic presidential nominee Hillary Clinton beat Trump in the district by a wide margin. That result immediately left Issa as a top Democratic target for 2018.

Trump personally vouched for Issa during his reelection bid, tweeting on Nov. 1 "@DarrellIssa is a very good man. Help him win his congressional seat in California."

Posted by Michael-in-Norfolk at Saturday, February 25, 2017