Attacks on the Free Press: How Dictatorships Begin 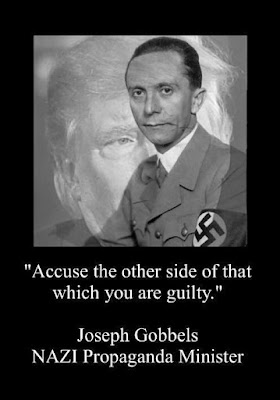 Numerous fact checking organizations have documented that Donald Trump, a/k/a Der Trumpenführer on this blog, lies 76 to 80% of the time.  Often the lies are gratuitous and one wonders why the issue addressed even merits mention much less lying about it.  Others are far more sinister and it should be apparent to all except Der Trumpenführer's most extreme and/unthinking supporters that the man has an agenda: attack and destroy anything and anyone who sees through his lies or who diminishes his insatiable and delusional self-promotion.  The goal?  Much like that of Hitler and his propaganda chief, Joseph Goebbels: destroy the free press and anything that can oppose their false narrative.  Sadly, Fox News and Breitbart are only too happy to fuel the false narrative.  Those that do not are now labeled "false news" as is every fact that undermines Der Trumpenführer's narcissistic view of himself or that calls into question his actions or self-enrichment.  An op-ed at CNN looks at the severe danger posed as does a piece in the New Yorker.  Here are highlights from CNN:

If you watched President Trump's astonishing press conference on Thursday, you might be forgiven for concluding that the most urgent problem facing America is that the media "is out of control." Some media "is fantastic," the president allowed. But on the whole, journalism is plagued by "false, horrible, fake reporting."

It's clear that America's new President has chosen his new best enemy. Now that the campaign is over and it's not very useful to drive the crowds into a frenzy of hatred against Hillary Clinton, Trump has found the new direction in which to focus his supporters' animosity. But this time, the anointed enemy serves an even more useful purpose.

On Friday, he made his point even more directly, tweeting "The FAKE NEWS media (failing @nytimes, @CNN, @NBCNews and many more) is not my enemy, it is the enemy of the American people. SICK!"

The advantages of having an enemy are well-known. In Orwell's dystopian novel "1984" -- suddenly a new best-seller in the Trump era -- the masses engage in a daily mandatory ritual, the "Two Minutes of Hate," during which their anger is feverishly stoked against the foe of the moment. Dictators, strongmen and autocrats have practiced the art of drumming up loathing toward others to great effect.

Trump . . . . .  knows that perceived enemies can help him fire up the base, rally the crowds and shift responsibility. Don't look at me, this script cries out; look over there, there is a threat, a danger, a foe.

When it comes to enemies, a demonized media is even more useful than the average antagonist.

Trump's real nemesis is the truth. By attacking the media, he opens up a new line of attack against facts, his true target. He is, after all, the Gaslighter in Chief. He is trying to confuse the public so that they will not believe inconvenient truths.

What he wants is to manufacture his own pseudo-truth; to create a reality where he always wins. Where the only polls that count are the ones where he's doing great. Where the only comments about him are compliments, and where anything negative is false, the work of an out-of-control media.

During Thursday's press conference, Trump unleashed torrents of lies, distortions and fabrications. When he said he won by the biggest Electoral College victory since Ronald Reagan, it took a reporter to point out that the last three presidents, Obama, Bush and Clinton, won by larger margins. He dismissed it all with a flippant, "Well, I don't know, I was given that information."

As the scandal surrounding his campaign's ties to Russia grows, Trump wants the public to think it's all the doing of the dishonest media. But journalists are not letting up, and the vast majority of Americans are not going to fall for Trump's tactics for very long. Even on the generally-supportive Fox News channel, the brave Shepard Smith called him out. "It's absolutely crazy," Smith said. "He keeps repeating ridiculous throwaway lines that are not true at all and sort of avoiding this issue of Russia as if we're some kind of fools for asking the question."

When Trump says the people don't trust the media, he doesn't know that the media outlets the people don't trust are the ones he likes -- and like him in return; probably the ones he described as "fantastic."
Trump wants America to think that it is the media that is out of control, because he wants to control what people view as true and false. It seemed like a good plan, but it has a fatal flaw. People are learning the difference between good journalism and bad.


The piece in the New Yorker looks further at the issue and the history of past distortions of the truth that have lead to horrific results.  Here are excerpts:


When the leaders of the Bolshevik movement—Lenin, Stalin, and the rest—used the term vrag naroda, an “enemy of the people,” it was an ominous epithet that encompassed a range of “wreckers” and “socially dangerous elements.” Enemies included clergy, intellectuals, monarchists, Trotskyists, “rootless cosmopolitans,” and well-to-do farmers. To be branded an enemy of the people was to face nearly inevitable doom . . . . . To be called an “enemy of the people” did not mean you had to hold oppositional thoughts or commit oppositional acts; it only meant that the dictator had included you in his grand scheme to insure the compliance of the population.

Robespierre, one of the architects of the Jacobin Reign of Terror, set out to “horrify” the opposition, and his instruments were the epithet, righteousness, and the blade.

In 1917, the same year as the Bolshevik seizure of power, Vladimir Ilyich Lenin published an essay in Pravda called “Enemies of the People,” in which he lionized the Jacobin Terror as “instructive.” His party, “the Jacobins of the twentieth century,” he wrote, should follow suit, if not with the guillotine, then with mass arrests of “the financial magnates and bigwigs.” Once in power, Lenin was far more brutal than the revolutionary French.

Now, Donald Trump, the elected President of the oldest democracy on earth, a real-estate brander and reality-T.V. star, has taken not to Pravda but to his own preferred instrument of autocratic pronouncement—the tweet—to declare the media “the enemy of the American people.”

For months, cool, responsible heads have been counselling hot, impulsive heads to avoid overreacting to Trump. We must give him a chance. We must not in all our alarm compare him to all the tin-pot dictators and bloody authoritarians who have disgraced history.  . . . . we were assured that everything was fine. He was simply fulfilling the agenda of his campaign. Calm down. Don’t react to every tweet. Don’t take the bait.

Then came his press conference, last week . . . . Trump instead took it upon himself to denounce repeatedly and at length the sinful, dishonest press and the “very fake news” it produces. It was unforgettable.

What Trump resembled at the lectern was an old-fashioned autocrat wielding a very familiar rhetorical strategy.

Joel Simon, the executive director of the Committee to Protect Journalists, makes the point that autocrats from Chávez to Erdoğan, Sisi to Mugabe, all follow a general pattern. They attack and threaten the press with deliberate and ominous intensity; the press, in turn, adopts a more oppositional tone and role. “And then that paves the way for the autocrat’s next move,” Simon told me. “Popular support for the media dwindles and the leader starts instituting restrictions. It’s an old strategy.”

At the same time, there are distinct signs that Trump is losing ground among members of the conservative media who had initially cut him some slack, not least because they felt the liberal media had been besotted by Barack Obama. The attacks on the legitimacy of the courts, on the intentions of the intelligence agencies, and on the patriotism of the press have become too evident, too repulsive to be discounted as mere sideshow.

In Vladimir Putin’s Russia, as in every genuinely authoritarian state, there are no “enemies”—or, at least, none with the capacity to challenge power. Calling on all the repressive means available in such a state—compliant courts and legislatures; the elimination of political competition; comprehensive censorship of television—soaring popularity ratings are achieved. President Trump may wish for such means, just as he wishes for such popularity. For all the chaos and resulting gloom these past weeks, it has been heartening to see so many “enemies of the American people”—protesters, judges, journalists, citizens of all kinds, even some members of Congress—do their work despite Presidential denunciation, not necessarily as partisans of one party or another but as adherents to a Constitution.

The resistance must continue and Trump must be driven from office, preferably after being found guilty of treason in such glaring terms that he and his agenda will be rejected by all but the most extreme racists, Christofascists and misogynists who have been the bedrock of his base. The man is unfit for office.  Oh, and if we are lucky, Mike Pence will be implicated as well.
Posted by Michael-in-Norfolk at Sunday, February 19, 2017