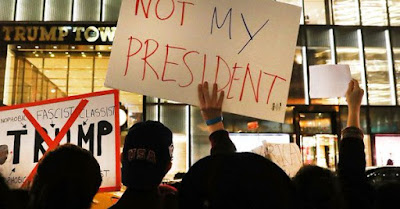 Back when the Tea Party was organizing, Republicans thought it was great since the target of the venom was Democrats and progressive policies. Once the aim was shifted to incumbent Republicans, the GOP love affair for the Tea Party became something different.  Indeed, much of the GOP is now controlled by the very same Christofascists and white supremacists who used the Tea Party moniker to hide their real agenda.  Now that these same pitch fork carrying reactionaries control the Republican Party and have Der Trumpenführer as their anointed leader, suddenly organizing for political change is something abhorrent - at least if the organizers and protesters are liberals and progressives rather than right wing Christian extremists and would be KKK members and white nationalists.  A piece in New York Magazine looks at the hypocrisy filled Republicans now decrying what they applauded when the insurgents were "conservatives."  Here are excerpts:Last night, congressional Republicans came home to rooms full of angry people. At town halls across the country, conservative lawmakers were protested, heckled, and shouted at. A few unfortunate souls were even asked to explain — in detail — the GOP plan for replacing the Affordable Care Act.

But Republicans aren’t worried. They’re onto liberals’ cute little game. They’ve realized that these so-called “protests” are, in truth, tactical demonstrations — planned, in advance — by people who want to bring about political change.

“The so-called March on Washington was actually, in numerous cases, planned out by civil-rights activists.”

And yet, this seems to be a genuine Republican talking point. Two days before Trump’s tweet, Texas senator John Cornyn shared a New York Post article that also tries to discredit the protests by claiming that they are strategically organized.

To be fair, “the protests are planned” is a considerably more honest line of attack than the “paid protesters” claim that preceded it.

So, liberal activists are conscious of optics and, when possible, try to engineer an impression of widespread opposition via such nefarious tactics as “not all sitting together.”

But there’s still a certain comedy to these complaints. The “training manual” Sperry stumbled upon has been proudly shared by Democrats and liberal activists over social media for months. The central charge of Sperry’s op-ed is that Organizing for Action is, in truth, an Obama-aligned front-group whose true purpose is … organizing for action.

Of course, the audiences at these town halls aren’t perfect representations of district-wide public opinion. And of course, professional political organizers are trying to channel liberal outrage in productive directions. This is how politics is practiced on both sides of the aisle. Earlier this month, the tea-party-aligned outside group FreedomWorks announced that it will be organizing rallies and town hall counter-protests in support of Obamacare repeal.

OFA’s “training manual” isn’t what’s unusual here. What’s unusual is the number of people eager to study it.  Activists do try to create an exaggerated impression of public support for their goals. But the more people they organize, the less hyperbolic that impression becomes.

The anti-Trump and anti-GOP protests need to continue to grow and make sure that Trump's approval numbers tank further and to insure the Congressional Republicans start worrying more about their own re-election prospects supporting the delusional, if not insane, standard bearer of their party.

Posted by Michael-in-Norfolk at Thursday, February 23, 2017