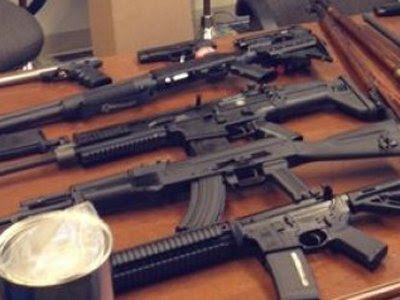 While the husband and I are planning to get hand guns and concealed carry permits in light of the growing anti-LGBT agenda flowing from Der Trumpenführer's regime, we are strong gun control supporters, especially when it comes to assault weapons, the weapon of choice of terrorists and other mass murderers.  Thus, I was thrilled to see that the United States Court of Appeals for the Fourth Circuit ruled en banc to uphold a Maryland ban on the sale of assault rifles.  The full opinion can be viewed here.  The Court's common sense ruling hinged on several concepts: (i) that military weapons need not be in the hands of individual civilians, (ii) communities and states should have the right to regulate weapons that pose a dangerous threat of mass death, and (iii) gun manufacturers should not be able to use the courts to circumvent legislatures.  Slate has details on the ruling.  Here are highlights:

On Tuesday, the U.S. Court of Appeals for the 4th Circuit ruled that the Second Amendment doesn’t protect assault weapons—an extraordinary decision keenly attuned to the brutal havoc these firearms can wreak. Issued by the court sitting en banc, Tuesday’s decision reversed a previous ruling in which a panel of judges had struck down Maryland’s ban on assault weapons and detachable large capacity magazines. Today’s ruling is a remarkable victory for gun safety advocates and a serious setback for gun proponents who believe the Second Amendment exempts weapons of war from regulation.

In 2013, Maryland passed a law barring the sale, possession, transfer, or purchase of what it dubbed “assault weapons,” including AR-15s, AK-47s, and semiautomatic rifles. It also banned copies of these firearms and large capacity magazines. Gun advocates sued, alleging that the law violated their right to keep and bear arms under the Second Amendment. A district court rejected their claims, but a panel of judges from the 4th Circuit reversed that rejection, holding that the Maryland law infringed on gun owners’ Second Amendment rights—and that gun regulations must be subject to the extremely demanding “strict scrutiny” standard. The full court voted to vacate that decision and rehear the case, and Tuesday’s decision marks a vigorous rejection of that extreme stance.

The majority opinion opens with a disturbing account of several recent mass shootings enabled by the kind of assault weapons that Maryland seeks to ban. In Newtown, Aurora, San Bernardino, Orlando, Binghamton, Tucson, Virginia Tech, and Fort Hood, mass shooters used either military-style rifles or high-capacity magazines, significantly increasing the ultimate death tolls. Newtown, in particular, compelled Maryland to ban these weapons. The state recognized that the Supreme Court’s decision in D.C. v. Heller protects citizens’ right to keep handguns in the home. But it argued that the firearms it had proscribed constituted “dangerous and unusual weapons,” which the Heller court said could be outlawed.

A majority of the 4th Circuit agreed with Maryland, holding that the weapons it forbade were sufficiently similar to M-16 rifles to fall outside the ambit of the Second Amendment.

“Whatever their other potential,” the court wrote, these weapons “are unquestionably most useful in military service. That is, the banned assault weapons are designed to kill or disable the enemy on the battlefield.”

“The next effect of these military combat features,” the majority concluded, “is a capability for lethality—more wounds, more serious, in more victims—far beyond that of other firearms in general, including other semiautomatic guns.” . . . .  It is a weapon of war, not the tool of self-defense envisioned by the Heller court.

Although the majority held that these weapons fell outside the scope of the Second Amendment altogether, it also noted, as an “alternative basis,” that even if the amendment applied, the Maryland law would still be constitutional. Since the law does not “effectively disarm individuals or substantially affect their ability to defend themselves,” it would only be subject to intermediate scrutiny if the Second Amendment applied. And the law meets that level of scrutiny because it is “reasonably adapted to a substantial governmental interest.”

The most striking part of Tuesday’s decision is a concurrence written by Judge J. Harvie Wilkinson III, a Reagan appointee. Wilkinson joined the majority opinion, but he wrote separately to express his discomfort with the gun lobby’s strategy of using the courts to increase access to dangerous firearms:

As Heller recognized, there is a balance to be struck here. While courts exist to protect individual rights, we are not the instruments of anyone’s political agenda, we are not empowered to court mass consequences we cannot predict, and we are not impaneled to add indefinitely to the growing list of subjects on which the states of our Union and the citizens of our country no longer have any meaningful say.

Wilkinson also criticized the dissenting judges, as well as the plaintiffs in this case, for attempting to take gun regulation out of democratic sphere almost  entirely.

His panegyric to judicial restraint with regard to Second Amendment interpretation is quite moving:

Disenfranchising the American people on this life and death subject would be the gravest and most serious of steps. It is their community, not ours. It is their safety, not ours. It is their lives, not ours. To say in the wake of so many mass shootings in so many localities across this country that the people themselves are now to be rendered newly powerless, that all they can do is stand by and watch as federal courts design their destiny—this would deliver a body blow to democracy as we have known it since the very founding of this nation.

In urging us to strike this legislation, appellants would impair the ability of government to act prophylactically. More and more under appellants’ view, preventive statutory action is to be judicially forbidden and we must bide our time until another tragedy is inflicted or irretrievable human damage has once more been done.

I may be dating myself, but Wilkinson was a young professor at the University of Virginia School of Law when I was a law student.
Posted by Michael-in-Norfolk at Tuesday, February 21, 2017