Is Trump Preparing for Mass Deportations? 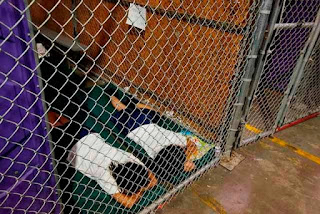 Yesterday the shoe dropped on transgender students as Der Trumpenführer's regime withdrew support for the Obama administration' expansive reading of Title IX as his press secretary said that transgender rights were a state's right issue - just as was done with the Jim Crow laws for decades. For the rest of the LGBT community, we continue to wait for the GOP controlled Congress' passage of the First Amendment Defense Act that will legalize open anti-LGBT discrimination.  For Hispanics and immigrants, the shoe also dropped yesterday as Der Trumpenführer's regime seeming took first steps towards greatly ramped up deportations.  A piece in Politico looks at today's developments.  Here are are article highlights:

President Donald Trump pledged during his campaign to create a deportation force. Now, he’s equipped federal immigration agents with the tools to potentially remove millions of immigrants from the country.

Serious criminals will still be a top target for federal immigration officers. But the priorities will be greatly expanded to include undocumented immigrants charged with crimes or those who have committed acts that could constitute a chargeable offense.

The Trump administration’s deportation push will not be limited to undocumented immigrants. The memo stresses that all “removable aliens” could be subject to immigration enforcement under the new guidelines.

The Migration Policy Institute, which bills itself as a non-partisan think tank, found that more than half of an estimated 1.9 million deportable immigrants with criminal records were in the country lawfully, either using green cards or some other type of visa.

The guidance issued Tuesday prioritizes the arrest of deportable immigrants who have "abused" public benefits, misrepresented themselves, or "in the judgment of an immigration officer, otherwise pose a risk to public safety or national security." The memo gives few specifics on how each of these criteria will be determined.

The guidance also makes clear that driving without a license, a frequent offense for undocumented immigrants, could make an individual "subject to immigration arrest, detention and, if found removable by final order, removal from the United States."

[T]he guidance presents undocumented immigrants as a dire threat. "The surge of illegal immigration at the southern border has overwhelmed federal agencies and resources and has created a significant national security vulnerability to the United States," the administration said, explaining its rationale.

The memos also say DHS will hire 10,000 new immigration officers and reverse a number of Obama administration policies. Specifics on how the agency will hire so many officers remain scarce, with the administration saying they are working on a "hiring plan."

The memos also say the administration will limit parole into the United States, to only be used "sparingly and only in cases where, after careful consideration of the circumstances, parole is needed because of demonstrated urgent humanitarian reasons or significant public benefit."

Breaking up families, unleashing hate and discrimination - this is what evangelical "Christians" voted for when they voted for Der Trumpenführer.