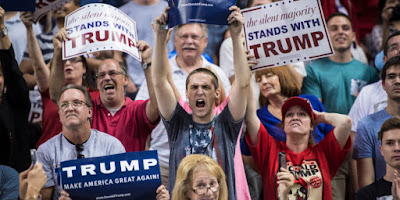 A piece in the Washington Post looks at the angst enveloping many Trump voters - excluding those who have benefited under Obamacare and suddenly realized their voted to cut their own throats - as Trump is pummeled for his corruption, possible treason, and chaotic regime.  Somehow these folks are baffled by the fact that they voted for a vile, lying, narcissistic sexual predator and are now facing a backlash by the majority that did not support an unfit, morally bankrupt candidate. Indeed, if they thought they and their retrograde, bigoted views were under attack during the Obama years, they now find themselves facing even more ridicule if not out right hostility.  Do I feel any sympathy for these folks?  Not one bit.  In fact, I hope Der Trumpenführer's time in office proves very short - impeachment and/or a treason trial followed by life in prison is a delicious thought - and that the majority of the nation rallies to crush the agenda of these selfish and misogynistic individuals.  Here are highlights from the Post piece:

Many of President Trump’s most dedicated supporters — the sort who waited for hours in the Florida sun this weekend for his first post-inauguration campaign rally — say their lives changed on election night. Suddenly they felt like their views were actually respected and in the majority.

But less than one month into Trump’s term, many of his supporters say they once again feel under attack — perhaps even more so than before.

Those who journeyed to Trump’s Saturday evening event on Florida’s Space Coast said that since the election, they have unfriended some of their liberal relatives or friends on Facebook. They don’t understand why major media outlets don’t see the same successful administration they have been cheering on. And they’re increasingly frustrated that Democrats — and some Republicans — are too slow to approve some of the president’s nominees and too quick to protest his every utterance.

“There’s such hatred for the man,” she said. “I just don’t get it.” . . . It was a common sentiment at the rally in an airplane hangar here, flanked by Air Force One and attended by about 9,000 people. There were chants of “CNN sucks!” and “Tell the truth!”

Rally attendees panned coverage of the chaos within his administration, the cost of security for his family and the president’s now-halted executive order that briefly banned refugees and residents of seven Muslim-majority countries. Many acknowledged that the president’s first month could have been smoother, especially with the rollout of the travel ban, but they said the media has overblown those hiccups . . .

Several people said they would have liked to see more coverage of a measure that Trump signed Thursday that rolled back a last-minute Obama regulation that would have restricted coal mines from dumping debris in nearby streams. At the signing, Trump was joined by coal miners in hard hats.

“If he hadn’t gotten into office, 70,000 miners would have been put out of work,” Patricia Nana, a 42-year-old naturalized citizen from Cameroon. “I saw the ceremony where he signed that bill, giving them their jobs back, and he had miners with their hard hats and everything — you could see how happy they were.”

The regulation actually would have cost relatively few mining jobs and would have created nearly as many new jobs on the regulatory side, according to a government report — an example of the frequent distance between Trump’s rhetoric, which many of his supporters wholeheartedly believe, and verifiable facts.

[She] gets most of her news from talk radio — “I listen to Herman Cain on my way into work, I have Sean [Hannity] on my way home,” she said — and Fox News. . . . But they didn’t know much about the resignation of Trump’s national security adviser Michael Flynn on Monday amid accusations that he improperly discussed U.S. sanctions with the Russian ambassador — and then withheld that information from Vice President Pence and other top officials.

The division that has consumed the country was on display outside Trump’s rally.

On one side of the street: Thousands of his supporters wearing campaign gear and vendors selling anti-Hillary Clinton merchandise and T-shirts showing a map of the 2016 election by county, with most of the country colored Trump-red and the legend: “We the Deplorable.”

On the other side of the street: Hundreds of protesters gathered in a “free speech zone” behind orange mesh fencing. Several wore pink knit hats, and some carried signs that focused on Trump’s alleged connections to Russia: “Impeach that puppet” and “I can see Russia.”

Note the cited news sources of Trump supporters.  Embracing ignorance is a conscious choice.  By limiting the "news" they receive to unreliable sources that in some cases are unhinged and/or little more than propaganda outlets.  Open your eyes and get off your ass and educate yourself.  The, and only then, will these folks understand why they are held in contempt or revulsion by so many.