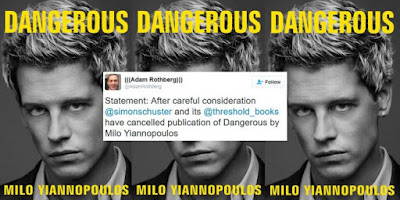 There are many self-loathing gays who cling to conservativism.  Some are closeted like, in my view, Republicans Rick Santorum and Ken Cuccinelli who are just a tad too hysterical about gays and gay relationships.  Then you have "out" gays who nonetheless cling to the GOP - think the Log Cabin Republicans - even as conservatives trash them and work to make them third class citizens.  Then there is alt-right provocateur Milo Yiannopoulos who mainly seeks to shock, insult and denigrate the rest of the LGBT community.  In my view, all three categories of individuals require serious mental health interventions, but Yiannopoulos falls into a category all his own.  Seemingly, his never ending effort to shock and appall has at last backfired.  In the wake of newly released videos that suggest a support for pedophilia, he finds his misconceived book deal cancelled, himself dis invited from CPAC, a gathering of right wing extremists, and his job at the always sleazy Breitbart News at risk.    USA Today looks at  Yiannopoulos' self-immolation.  Here are excerpts:

Milo Yiannopoulos' book Dangerous was canceled abruptly Monday after Republican conservatives released clips of videos-with-audio in which he seemed to condone sex between men and boys.

In a terse statement released Monday afternoon, the right-wing provocateur's publisher said: "After careful consideration,  and its Threshold Editions imprint have canceled publication of Dangerous by Milo Yiannopoulos."

Minutes later, Yiannopoulos posted this on Facebook: "They canceled my book."

Yiannopoulos' provocative right-wing persona (he attacked feminists and trashed women who used birth control, to name a few of his views), helped get him a reported $250,000 book deal from Threshold Editions, a conservative imprint of Simon & Schuster, which was due to release Dangerous in June.

The gay British writer, who has collected kudos in the era of  as a self-described "dangerous" provocateur, teetered on the edge of disaster Monday after Republican conservatives released clips of videos-with-audio in which he talked about his own past as a teenager who had sex with men and suggested that some young teen boys might be old enough to give consent to such sexual relationships.

Yiannopoulos tried on Facebook to defend himself but it didn't matter. He was abruptly dis-invited from speaking at the annual Conservative Political Action Conference starting this week in Washington, according to a tweet from the  chairman .

Meanwhile, Yiannopoulos' employer, Breitbart News, was reported by Fox Business Network and Washingtonian magazine to be considering whether to fire him from his writer/editor job where he has gained fame and infamy in equal measure while gleefully aiming vitriol at liberals, gays, Jews, foreigners, Democrats, plus many others.

Yiannopoulos has so far not commented on his CPAC snub. But he fought back against his critics in a long post Monday on Facebook that he called "a note for idiots."  He denied being in favor of pedophilia, acknowledged he does believe there are relationships between "younger men" and older men that can help a young gay man, and admitted he shouldn't have used the word "boy" in discussing those relationships.

The clips, dug up after Yiannopoulos was invited to speak at CPAC, record Yiannopoulos discussing Jews, sexual consent, statutory rape, child abuse and homosexuality. He also joked — in an "edgy way," he claimed — about his own teen sexual encounter with a priest.

Sorry, but I cannot summon an ounce of sympathy for this vile individual.  Karma can be a bitch and he royally deserves to receive what he has dished out.

Posted by Michael-in-Norfolk at Monday, February 20, 2017