The Trump Effect: Significant Drop in Tourism to the United States 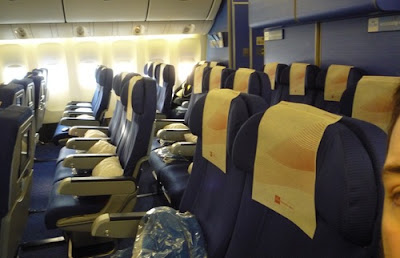 Among the many things that Der Trumpenführer claims he will do is bring back jobs to America. Like most of what the man says, the claim is untrue, especially in terms of coal industry jobs and manufacturing jobs.  And in one industry, the travel industry, Trump is undermining jobs and  could be the cause of job losses.  It seems that many foreign tourists have no desire to visit America given the hate, bigotry and discrimination that Der Trumpenführer have unleashed.  Frommers reports that there has been a "devastating drop" in tourism to the USA.  Indeed, the husband and I are headed to the UK in August to visit a much more LGBT welcoming country.   Here are highlights from travel experts at Frommers:

Though they may differ as to the wisdom of the move, the travel press and most travel experts are of one mind: They are currently drawing attention to an unintended consequence of the Trump-led efforts to stop many Muslims from coming to the U.S., pointing to a sharp drop in foreign tourism to our nation that imperils jobs and touristic income.  It’s known as the “Trump Slump.” And I know of no reputable travel publication to deny it. Thus, the prestigious Travel Weekly magazine (as close to an “official” travel publication as they come) has set the decline in foreign tourism at 6.8%. And the fall-off is not limited to Muslim travelers, but also extends to all incoming foreign tourists. Apparently, an attack on one group of tourists is regarded as an assault on all. As far as travel by distinct religious groups, flight passengers from the seven Muslim-majority nations named by Trump were down by 80% in the last week of January and first week of February, according to Forward Keys, a well-known firm of travel statisticians. On the web, flight searches for trips heading to the U.S. out of all international locations was recently down by 17%.  A drop of that magnitude, if continued, would reduce the value of foreign travel within the U.S. by billions of dollars. And the number of jobs supported by foreign tourists and their expenditures in the United States—and thus lost—would easily exceed hundreds of thousands of workers in hotels, restaurants, transportation, stores, tour operations, travel agencies, and the like.

According to the Global Business Travel Association, in only a single week following announcement of the ban against certain foreign tourists, the activity of business travel declined by nearly $185 million.  Other observers, including local tourist offices, have reached similar conclusions. In referring to New York City’s $60 billion tourist industry alone, the head of the city’s tourist effort complained that his agency’s effort to portray the United States as a welcoming destination to foreign citizens “was all in jeopardy.” Several other tourist officials have made like statements. . . . .  there is plenty of evidence for a negative conclusion.

As I have long said, hate and bigotry carry a heavy economic cost.  Given Virginia's heavy reliance on tourism, this is not welcomed news. One can only hope that Trump hotels are especially hard hit - a number of bankruptcy would be a form of divine justice.  Are you paying attention Rep. Scott Taylor?

Posted by Michael-in-Norfolk at Thursday, February 23, 2017