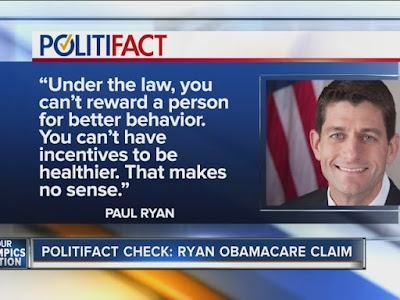 Listening to lying Republicans like Paul Ryan one is told that with Obamacare repeal, Americans will again have the freedom to purchase healthcare insurance that fits their needs.  Missing, of course, is any acknowledgement that for millions, the costs of such coverage is prohibitive and millions would be forced to give up coverage.  Amnesia reigns in terms of the fact that the free market and supposed competition was NOT keeping costs down before the advent of Obamacare and that insurance companies gladly price gouged and raped consumers with out of sight and ever increasing premiums.  Paul Ryan's solution: tax credits that would allegedly allow Americans to buy insurance.  The problem is that such credits would be nowhere near adequate.  Case in point, the husband and I pay over $1,200.00 each and every month out of pocket for coverage (this equates to almost $15,000 per year).  Yes, we are older, so premiums are higher, but then we aren't even purchasing family coverage.  The point is, a tax credit would have to be massive to cover this cost and many people are age bracket do not have our combined income and the ability to pay the difference. Ryan's plan is hogwash as discussed in a column in the New York Times:

Across the country, Republicans have been facing crowds demanding to know how they will protect the 20 million Americans who gained health insurance thanks to the Affordable Care Act, and will lose it if the act is repealed. And after all that inveighing against the evils of Obamacare, it turns out that they’ve got nothing.

Instead, they’re talking about freedom — which these days is the real refuge of scoundrels.

Actually, many prominent Republicans haven’t even gotten to the point of trying to respond to criticism; they’re just whining about how mean their constituents are being, and invoking conspiracy theories. Talk about snowflakes who can dish it out but can’t take it!

But perhaps the saddest spectacle is that of Paul Ryan, the speaker of the House, whom the media have for years portrayed as a serious, honest conservative, a deep thinker about how to reform America’s safety net. That reputation was never justified; still, even those of us who long ago recognized him as a flimflammer have been struck by his utter failure to rise to this occasion.

After years to prepare, Mr. Ryan finally unveiled what was supposedly the outline of a health care plan. It was basically a sick joke: flat tax credits, unrelated to income, that could be applied to the purchase of insurance.

These credits would be obviously inadequate for the lower- and even middle-income families that gained coverage under Obamacare, so it would cause a huge surge in the number of uninsured. Meanwhile, the affluent would receive a nice windfall. Funny how that seems to happen in every plan Mr. Ryan proposes.

That was last week. This week, perhaps realizing how flat his effort fell, he began tweeting about freedom, which he defined as “the ability to buy what you want to fit what you need.” Give me consumer sovereignty or give me death! And Obamacare, he declared, is bad because it deprives Americans of that freedom by doing things like establishing minimum standards for insurance policies.

I very much doubt that this is going to fly, now that ordinary Americans are starting to realize just how devastating loss of coverage would be. But for the record, let me remind everyone what we’ve been saying for years: Any plan that makes essential care available to everyone has to involve some restriction of choice.

Suppose you want to make insurance available to people with pre-existing conditions. You can’t just forbid insurance companies to discriminate based on medical history; if you do that, healthy people won’t sign up until they get sick. So you have to mandate the purchase of insurance; and you have to provide subsidies to lower-income families so that they can afford the policies. The end result of this logic is … Obamacare.

So yes, Obamacare somewhat restricts choice — not because meddling bureaucrats want to run your life, but because some restrictions are necessary as part of a package that in many ways sets Americans free.

So why do Republicans hate Obamacare so much? . . . . No, mainly they hate Obamacare for two reasons: It demonstrates that the government can make people’s lives better, and it’s paid for in large part with taxes on the wealthy. Their overriding goal is to make those taxes go away. And if getting those taxes cut means that quite a few people end up dying, remember: freedom!

Ryan's hypocrisy and dishonesty is mind numbing.  Making it all worse are his claims of being a devout Catholic - even though every single one of his policies goes directly against the Church's social gospel.  Ryan ought to be excommunicated.

...and mostly they hate that the name that the ACA's name has been publicly known as "ObamaCare" If it was the ACA, they would still be opposed to it, but since conservative news outlets started to refer it as ObamaCare which then became its popular name, the conservatives have been frothing at the mouth to remove anything with Obama's name attached to it.