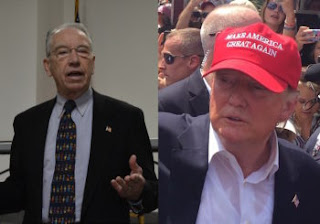 All around the country Congressional Republicans are facing outright hostile crowds of their constituents who are none too happy with Der Trumpenführer,'s regime and/or the GOP agenda (locally, GOP Congressman Scott Taylor got an earful).  Yes, the GOP has a slim control of Congress, but the party's toxic and, in my view, mentally unbalanced, leader received votes from less than 30% of all registered voters and lost the popular vote by almost 3 million votes.  That does NOT equate to a mandate no matter how badly self-serving Republicans may try to pretend otherwise.  From Obamacare repeal to the packing of the Cabinet with religious extremists and racists the majority of Americans are appalled and fearful for the nation's future.  Throw in possible collusion with Russian intelligence to swing the election to Trump and it makes for an explosive mix.  A piece in Daily Kos by Facebook friend Kerry Eleveld looks at the growing dissatisfaction and fury.  Here are excerpts:

Iowa Sen. Chuck Grassley, who helped stoke a wave of paranoia over so-called "death panels" back in 2010, got a sense at his town hall Monday of just how well Donald Trump's month-old administration is playing in the Midwest.

"It's like taking a shower in bad news every day," one woman told New York Times video reporter Thomas Kaplan, "it's exhausting."

The woman—who had never before felt compelled to attend a town hall—not only expressed terrible disappointment in how inaccessible Grassley had been, she was also frustrated with Republican lawmakers' total disregard for providing checks on Trump's power. Asked if she thought Sen. Grassley had "stood up" to the administration, she responded:

I don't think he's stood up to the administration at all. It feels to me like he used to be a moderate Republican, but that seems to be over now. He's definitely toeing the party line, which is disturbing.

In fact, the main reason she made the 100-mile trek to the Iowa Falls town hall was to hold Grassley, chair of the Senate Judiciary Committee, to account on investigating Trump's ties to Russia—an action the GOP has been stonewalling.

But she also sounded a cautionary note about how Trump's policies are playing in the state’s agricultural and manufacturing communities.

A lot of people who originally thought that they were going to help get better jobs and all that are starting to realize that it's not working out that way at all. That actually, it's driving business away, and they're very concerned about what's going to go on in Mexico if there's a trade war. We have pork, we have corn—it's a big deal around here.

Iowa exports through the Trans-Pacific Partnership—the deal Trump swiftly pulled out of via executive order—totaled $7.8 billion in 2015.

But beyond the TPP, a trade war could disrupt the state's entire export market, which is one of the foundations of Iowa's economy. The interview suggests that it’s not just Iowa’s industry representatives who are fretting about job losses.

So far, Republican congressional leaders like Mitch McConnell and Paul Ryan are sticking to Trump like glue. The more they ignore their constituents (as McConnell did Monday and GOP members sitting in Clinton districts have been doing all along), the higher the price Republicans will pay in 2018.

A trade war with Mexico could be devastating for Midwest agricultural states. Mexico has already made it clear that it may look to shift purchases of grain and beef from America to Brazil and Argentina.  If that happens, states like Iowa will be hit hard.  Grassley and others in the GOP may want to claim that the large hostile crowds are "paid protesters" but the reality is that they are not - at least not once one leaves the Fox News/Breitbart bubble..
Posted by Michael-in-Norfolk at Wednesday, February 22, 2017