The GOP is Still Crazy 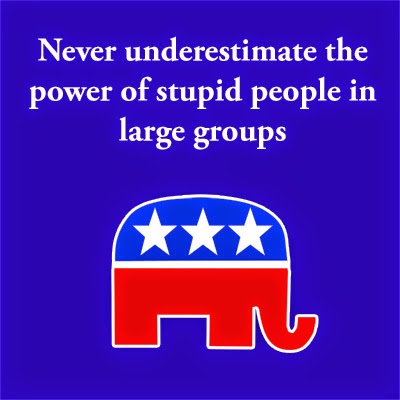 I find it maddening how much of the media either merely parrots the talking points of GOP apologists or is all to ready to promote the myth that there is a real reform movement within the Republican Party.  All one need do is look at the actions of GOP legislators and their flat earth proposals to realize that reform is a myth being peddled to dupe the gullible just as Chimperator George Bush campaigned on the dubious tag line of "compassionate conservatism" in 2000.  The Virginia House of Delagates is but one example of how far reality is from the myth of moderation or reform.  A piece in Salon looks at the deep seated - and perhaps increasing - insanity of the Republican party.  Here are excerpts:

It is a cardinal rule of horserace-style political journalism in the U.S. that no two elections can have the same narrative. That’s not to say certain tropes aren’t repeated ad nauseam. But it is to say that that the press corps’ desire to mitigate the unavoidable, soul-crushing monotony of a campaign often causes it to flip the script from one election to the next, despite politics in the real world changing much more slowly. If you look at the way the media’s covered the ongoing “invisible primary” to be the GOP’s next presidential nominee, you’ll see the narrative for 2016 is being pre-written already.

[B]ecause the story after 2012 focused on the Tea Party pulling Mitt Romney too far to the right, the narrative for 2016 will be about the Republican “establishment” throwing its weight around to nominate an ostensibly more moderate, electable candidate. The bland, cautious, managerial Republican Party of yesteryear is back! The crusading, militant and extremist Tea Party is over!
Except, well, it isn’t.

It’s not over in the U.S. Congress, where a shutdown-in-miniature is unfolding between the White House and the Tea Party wing of the GOP. It’s not over in Wisconsin, where a Tea Party-darling governor is slashing the state university system’s funding, changing its mission statement (while lying about it), and fighting tooth and nail to humiliate people on government benefits. It’s not over in North Carolina, where a billionaire-backed Tea Party government is also going after the public university system in its effort to turn the state into Kansas. And it’s not over in South Carolina, where one state representative hopes to mainline National Rifle Association propaganda to a generation of public school students.

Let’s stick with the South Carolina example for a moment, because I think it tells us much about the contemporary GOP’s character. According to Kimberly Johnson of Al Jazeera America, the recent decision on the part of PTR Industries, a gun manufacturer, to move its headquarters from Connecticut to South Carolina has inspired Republican state Rep. Alan Clemmons to propose what he’s calling the “Second Amendment Education Act.” As the name implies, the bill would “provide all public elementary schools, middle schools, and high schools” with “instruction in the Second Amendment” for no fewer than “three consecutive weeks in one grading period in each academic year.” The curriculum would be written by the NRA, of course.

“It’s a big handshake,” is how PTR Industries purchasing manager Bob Grabowski described Clemmons’ bill. “It’s a big ‘hello’.” He recounted how his company was treated by South Carolina locals, who are desperate for good-paying jobs in a state where the unemployment rate remains significantly higher than the national average. He and his co-workers were made to feel, he said, like “rock stars.”

The communications director for the Coalition to Stop Gun Violence, Ladd Everitt, told Al Jazeera that the possibility of the NRA writing a three-week-long curriculum is “a nightmare,” because the organization “endorses an insurrectionist interpretation of the Second Amendment.” As if there wasn’t enough of this in South Carolina already, an NRA-penned review of American history would leave millions of children under the impression that the Framers saw the Constitution much the same as the men behind the Confederate States of America.

[T]he Republican Party is still being driven by the Tea Party. And the Tea Party remains what it’s always been: A collection of dedicated, unsentimental and ambitious ideologues who don’t see themselves as responsible, competent managers, but as conservative crusaders on a transformative, holy mission.

Posted by Michael-in-Norfolk at Friday, February 13, 2015