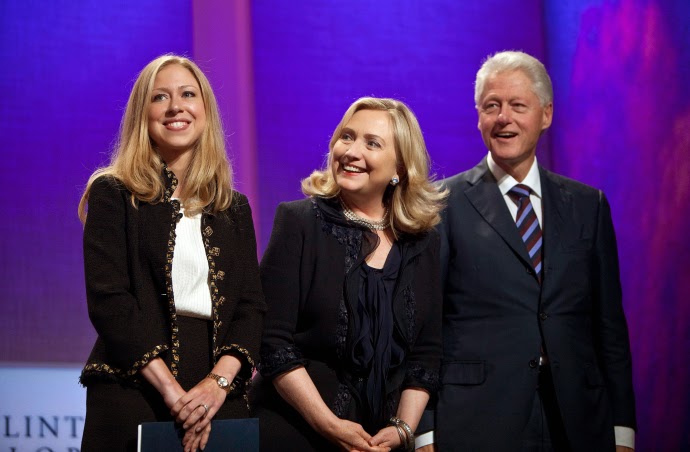 Since Bill Clinton left the White House, the Clintons have done very well financially and, with income inequality a new hot ticket item - even Republicans are pretending to be concerned about the issue even as GOP controlled state legislatures are passing tax cuts for the rich while raising "user fees" that hit the poor hardest - the question becomes whether or not the Clintons' ties to big money will undermine Hillary's would be populist message.  A piece in The New Yorker looks at the situation.  Here are highlights:

This week, as the Democratic National Committee was preparing to announce that Philadelphia will host the Party’s 2016 convention, Hillary Clinton’s still undeclared Presidential campaign was running into a media squall about money—two of them, actually. First, David Brock, the conservative activist turned liberal activist, resigned from Priorities USA Action, a big money-raising group that is supporting Clinton, and accused the group of taking part in an “orchestrated political hit job” on two other pro-Clinton groups that Brock is involved with. Then, the Guardian revealed that a number of wealthy donors to the Clinton Foundation, a philanthropic organization set up by Bill Clinton, were clients of the Swiss division of H.S.B.C., a big bank that is embroiled in a tax-avoidance scandal.

The upshot of the Brock story was that Hillary’s money guys and gals are squabbling, and that Priorities USA Action, the political-action committee that spent seventy-five million dollars supporting Barack Obama, in 2012, is off to a slow start this year. (According to Politico, it had less than half a million dollars in the bank at the end of 2014.) The Guardian story, which was based on leaked documents from H.S.B.C., identified seven rich donors to the Clinton Foundation who had bank accounts at H.S.B.C.’s Geneva branch. One of them, Richard Caring, a British entrepreneur, “used his tax-free Geneva account to transfer $1m into the New York-based foundation,” the newspaper reported. “The HSBC records suggest Caring’s $1m donation was paid in return for former president Bill Clinton’s attendance at a lavish costume charity ball organised by Caring in St Petersburg, Russia.”


Outside of the political bubble, I doubt that one likely 2016 voter in twenty noticed either of these articles, or the follow-ups. But, at a moment when Hillary is reported to be consulting with numerous experts about how to tackle rising inequality, the articles raise anew an awkward question: How far will the Clinton family’s ties to moneyed interests complicate Hillary’s efforts to fashion a populist campaign built around the theme of defending the middle class?

One way of seeking to answer that question is to point out that, in politics (and philanthropy, too), cultivating donors and raising a lot of money are unavoidable parts of the business. And, although some people, myself among them, will never be wholly persuaded that he who pays the piper doesn’t call the tune, the average voter doesn’t seem to judge candidates by their financial backers.

Perhaps Clinton can recapture the spirit and message she displayed in the summer and fall of 2008. First, though, she will need to reinforce her defenses against the attacks that are sure to come from the left and the right.

One way to do that is to put together a formidable campaign apparatus and a big war chest. Until the Brock story broke, few people in the political world had believed that these objectives would present a major issue. Evidently, they might. The first task facing John Podesta, the departing White House official who is slated to become chairman of the Clinton campaign, will be to gather together the various Democratic fund-raising groups and persuade them to coöperate. That won’t necessarily be easy.
The issues relating to the Clinton Foundation, which Bill Clinton founded in 2001, go beyond internecine conflict and bruised egos. Some people close to the Clintons have long been concerned that the foundation’s biggest venture, the Clinton Global Initiative, could present some vulnerabilities for Hillary. In its own words, the C.G.I. “convenes global leaders to create and implement innovative solutions to the world’s most pressing challenges,”

The Guardian was careful to avoid any suggestion of illegality. “It is not unlawful for US or other non-Swiss citizens to hold accounts in Geneva and there is no evidence any of the Clinton donors with Geneva accounts evaded tax,” the story said.. . . And, in addition, “it is not against US law or charity regulation to accept donations from non-US citizens, or from overseas accounts.”

This is a legitimate debate to have—and Hillary, at some point, may well be obliged to engage in it. Indeed, she might be eager to do so. From her perspective, discussing how many lives the Clinton Foundation has improved in sub-Saharan Africa and other deprived regions would be a lot more palatable than getting dragged into the tax affairs of some rich “friends of Bill” or the infighting among her fundraisers.

Posted by Michael-in-Norfolk at Saturday, February 14, 2015