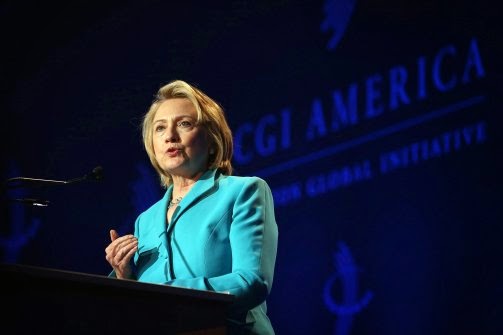 While the GOP continues to be plagued by its clown car - or perhaps bus - of would be 2016 presidential candidates, on the Democrat side of the isle, despite attempts to draft Elizabeth Warren, Hillary Clinton appears unchallenged and is proceeding to build her Democrat army even though she has yet to announce her candidacy.  To many in the delusional far right, the specter of a Hillary candidacy/presidency is a nightmare come true.  About the only thing Hillary doesn't have to taint her with the knuckle draggers of the GOP is that she isn't black. A piece at Politicususa.com looks at Clinton's preparations.  Here are highlights:

Hillary Clinton hasn’t even announced her 2016 run yet but she is already staffed up with huge Democratic talent, some of which is coming to her straight from the Obama White House. Planning to delay campaigning until late summer, the former Secretary of State, Senator, and First Lady has already amassed a Dream Team, pulling from Obama’s team to round out her already solid support.

Anne Gearan and Dan Balz at the Washington Post reported that even though she hasn’t even announced yet, Clinton’s campaign is looking like an incumbent’s reelection campaign:

At this point, without so much as an announcement, she has settled on — at the least — a campaign chairman, a campaign manager, a chief strategist and lead pollster, another pollster, a lead media adviser, a communication director, a deputy communications director, a focus group director and a communications strategist.
…
Her effort at this stage looks a lot like an incumbent’s reelection campaign: She will be running largely in support of a sitting president and his agenda, and is busy hiring many of President Obama’s former aides.

While pundits and strategists focus on fears that Clinton could lose her edge by delaying hitting the trail and worry over appearances of inheriting a mantle from President Obama, there is another side to this coin.

What we have here is a strong would-be candidate, who consistently polls as a favorite politician, who is well known to the American people, whose last name is associated with economic boom times, and who is also carrying her own unique mantle of potentially being the first female President.

That’s a pretty heady mix of positives with a dose of freshness, and it’s coming on the wave of a Republican war on women that is only getting more obvious as even their own female representatives balk at their attempts to deny women liberty.


Clinton is filling in the gaps where her 2008 campaign was stressed. She is utilizing the very talent that brought her down.  It’s brilliant.

It’s also further evidence of the imagined deal back when President Obama asked her to be his Secretary of State, a job which undeniably beefs up foreign policy cred – a continued weakness on the Republican side.

The biggest challenge for Clinton is going to be not falling into the trap of Democrats of 2014; that is, not alienating the Obama supporters in necessary efforts to distinguish herself from the President.
Because of the heir apparent appearance of much of her would be candidacy, Clinton will be attacked for being like royalty, for being lazy, for not earning it, and other Rovian digs that attack her strengths. But these attacks will be hard to make stick, given her long career full of earnest hard work for causes she has steadily believed in. Also, the first female president didn’t earn it? LOL. Say it again, Republicans, because that’s almost as much of a winner as the latest GOP mantra that rape is an opportunity.

[I]t’s her steel spine, loyalty, gritty determination and steady vision for the under privileged that make Clinton so dangerous to Republicans.