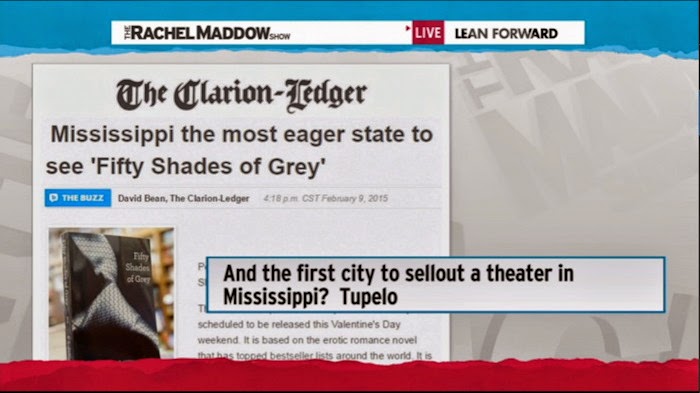 [A]dvance ticket sales for the movie "50 Shades of Grey" have been pretty spectacular, and no faster than in the bible belt, of course. Mississippi, Arkansas, and West Virginia top the list, and no town has done better for the film than Tupelo, where many shows have sold out.

Tupelo, of course is home to the anti-gay hate group and Christian ministry, American Family Association. The group's most famous face is Bryan Fischer, their radio host and now-former spokesperson, after a particularly embarrassing series of events forced them to distance themselves from him.

The AFA has denounced the film, calling it "damaging," and saying a "more apt title for the movie would be ‘Fifty Shades of Evil.’"

Why do I suspect that sexually repressed women married to overweight, chauvinist "good old boys" have been the top purchasers?
Posted by Michael-in-Norfolk at Saturday, February 14, 2015