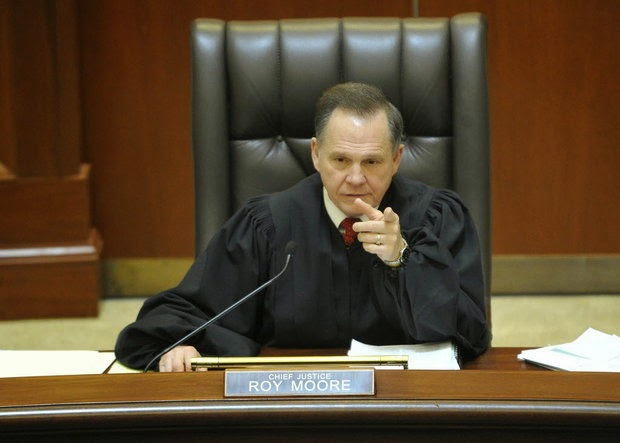 Since I lived in Alabama years ago, the state has become more insane with every passing year and no one represents the craziness that has swept the state more than Chief Justice Roy Moore who is utterly unfit for office yet who, because of Alabama's elected judiciary, has been put back on the bench after removal a decade ago for contempt of federal court orders.  Now, Moore is at it again and has ordered every probate judge in Alabama to refuse to issue marriage licenses to same sex couples.  One can only hope that the federal courts will issue a contempt order and have Moore escorted to the nearest jail.  WAFF News has details.  Here are highlights:

Late Sunday night, Alabama Chief Justice Roy Moore issued an order in which he instructs state probate judges to neither issue nor recognize a marriage license for same-sex couples.

The order states, "Effective immediately, no Probate Judge of the State of Alabama nor any agent or employee of any Alabama Probate Judge shall issue or recognize a marriage license that is inconsistent with Article 1, Section 36.03, of the Alabama Constitution or § 30-1-19, Ala. Code 1975."

It continues to say that if any probate judge fails to follow the state constitution, "it would be the responsibility of the Chief Executive Officer of the State of Alabama, Governor Robert Bentley... to ensure the execution of the law."

The 11th Circuit U.S. Court of Appeals in Atlanta rejected the State of Alabama's request to issue a stay pending an appeal of the State's ban on gay marriage. That rejection paves the way for same-sex marriages to begin on Monday.

James Robinson with the Free2Be Foundation, said Sunday night that couples who are planning to wed Monday to not let Moore's edict prevent them from coming down to the planned Wedding Week program taking place outside the Madison County Courthouse.

"I've heard that the Madison County Probate Judge, Tommy Ragland, is going to go forward and do what he said he was going to do, and follow federal orders," Robinson said. "We are anticipating no problems tomorrow morning."

Officials confirmed licenses would indeed be issued according to the federal overturn.

The Human Rights Campaign blasted Moore's order. In a statement Sunday night, they called his order "in clear violation of all codes of legal ethics, boundaries of jurisdiction, and moral decency."

Moore needs to be locked up today.   Meanwhile, a column in one Alabama newspaper is suggesting that Moore is perhaps a self-loathing closeted gay!
Posted by Michael-in-Norfolk at Monday, February 09, 2015