America is Heading Full Speed Back to the 19th Century 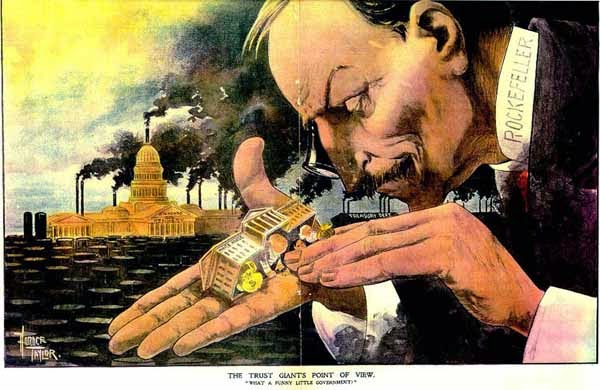 I've made the argument a number of times that the Republican Party is trying to reestablish the so-called Gilded Age of the late 19th century when robber barons enjoyed incredible wealth and power while the rest of us, including laborers and workers, got what few scraps were left over.  In a column in Salon, former secretary of labor Robert Reich echo's my concerns.  What's amazing is how the cretins the GOP courts through religion, racism, and anti-modernity are too stupid to understand that they are supporting politicians working directly against their best interests and the futures of their families.  Here are column highlights:

My recent column about the growth of on-demand jobs like Uber making life less predictable and secure for workers unleashed a small barrage of criticism that workers get what they’re worth in the market.

A Forbes Magazine contributor, for example, writes that jobs exist only  “when both employer and employee are happy with the deal being made.” So if the new jobs are low-paying and irregular, too bad.

Much the same argument was voiced in the late nineteenth century over alleged “freedom of contract.” Any deal between employers and workers was assumed to be fine if both sides voluntarily agreed to it.

It was an era when many workers were “happy” to toil twelve-hour days in sweat shops for lack of any better alternative.

It was also a time of great wealth for a few and squalor for many. And of corruption, as the lackeys of robber barons deposited sacks of cash on the desks of pliant legislators.

Finally, after decades of labor strife and political tumult, the twentieth century brought an understanding that capitalism requires minimum standards of decency and fairness – workplace safety, a minimum wage, maximum hours (and time-and-a-half for overtime), and a ban on child labor.

We achieved that through antitrust laws that reduced the capacity of giant corporations to impose their will, and labor laws that allowed workers to organize and bargain collectively. . . . . But now we seem to be heading back to nineteenth century.

Corporations are shifting full-time work onto temps, free-lancers, and contract workers who fall outside the labor protections established decades ago.  The nation’s biggest corporations and Wall Street banks are larger and more potent than ever.

And labor union membership has shrunk to less than 6 percent of the private-sector workforce.
So it’s not surprising we’re once again hearing that workers are worth no more than what they can get in the market.

Yet since around 1980, even though the economy has doubled once again (the Great Recession notwithstanding), the wages most Americans have stagnated. And their benefits and working conditions have deteriorated.

This isn’t because most Americans are worth less. In fact, worker productivity is higher than ever.  It’s because big corporations, Wall Street, and some enormously rich individuals have gained political power to organize the market in ways that have enhanced their wealth while leaving most Americans behind.

But less tolerance toward labor unions — as workers trying to form unions are fired with impunity, and more states adopt so-called “right-to-work” laws that undermine unions.

We seem to be heading full speed back to the late nineteenth century.

Posted by Michael-in-Norfolk at Tuesday, February 10, 2015