Today's GOP and the History of Lynchings in the South 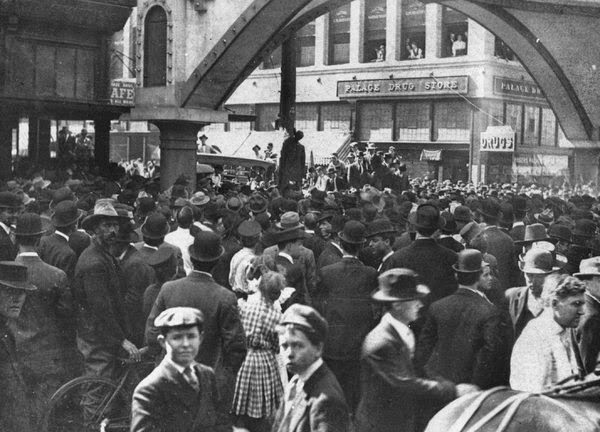 With many Alabama courts once again refusing to comply with federal court orders, lunatics of the far right claiming that "Christians have never killed in the name of God," and the Republican Party increasingly welcoming white supremacists into its ranks, it is perhaps timely that the New York Times is carrying a piece that looks at the history of lynchings in the South.  What we see in today's actions is largely being done by the descendants of these lynch mobs and it is far past time that groups like The Family Foundation here in Virginia be tied to their historical antecedents.  And yes, besides hanging likely innocent blacks, the "godly Christians" resorted to burning blacks alive much like ISIS has done to terrorize the populace.  Here are article highlights:

A block from the tourist-swarmed headquarters of the former Texas School Book Depository sits the old county courthouse, now a museum. In 1910, a group of men rushed into the courthouse, threw a rope around the neck of a black man accused of sexually assaulting a 3-year-old white girl, and threw the other end of the rope out a window. A mob outside yanked the man, Allen Brooks, to the ground and strung him up at a ceremonial arch a few blocks down Main Street.


South of the city, past the Trinity River bottoms, a black man named W. R. Taylor was hanged by a mob in 1889. Farther south still is the community of Streetman, where 25-year-old George Gay was hanged from a tree and shot hundreds of times in 1922.

And just beyond that is Kirkin, where three black men, two of them almost certainly innocent, were accused of killing a white woman and, under the gaze of hundreds of soda-drinking spectators, were castrated, stabbed, beaten, tied to a plow and set afire in the spring of 1922.

[T]he Equal Justice Initiative in Montgomery, Ala., released a report on the history of lynchings in the United States, the result of five years of research and 160 visits to sites around the South. The authors of the report compiled an inventory of 3,959 victims of “racial terror lynchings” in 12 Southern states from 1877 to 1950.

Professor Beck, who teaches at the University of Georgia, has not reviewed the new list. But he pointed out that, with racial violence so extensive and carried out in so many different ways, compilers of lists may differ on what constitutes a lynching; the new list, as opposed to some previous ones, includes one-time massacres of large numbers of African-Americans, such as occurred in Arkansas in 1919 and in Louisiana in 1887.

“If you’re trying to make a point that the amount of racial violence is underestimated, well then, there’s no doubt about it,” Professor Beck said. “What people don’t realize here is just how many there were, and how close. Places they drive by every day.”

But, he continued, even when a major crime was alleged, the refusal to grant a black man a trial — despite the justice system’s near certain outcome — and the public extravagance of a lynching were clearly intended as a message to other African-Americans.

The bloody history of Paris, Tex., about 100 miles northeast of Dallas, is well known if rarely brought up, said Thelma Dangerfield, the treasurer of the local N.A.A.C.P. chapter. Thousands of people came in 1893 to see Henry Smith, a black teenager accused of murder, carried around town on a float, then tortured and burned to death on a scaffold.

Until recently, some longtime residents still remembered when the two Arthur brothers were tied to a flagpole and set on fire at the city fairgrounds in 1920.

This is the mindset and the type of people the GOP has welcomed into its ranks.  It's also the mindset of many who run so-called "family values" Christian groups - e.g., Tony Perkins of Family Research Council who has documented KKK ties. It's disgusting and it needs to be made widely known.
Posted by Michael-in-Norfolk at Tuesday, February 10, 2015