Did the Supreme Court Just Confirm It Will Make Same Sex Marriage Nationwide? 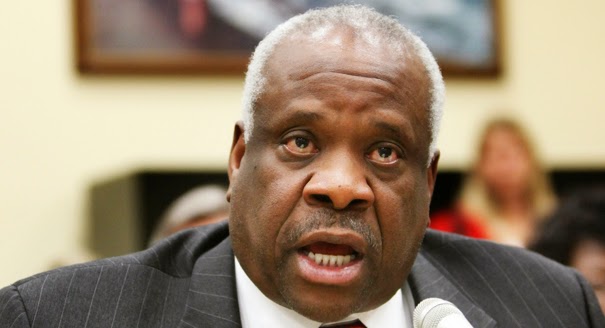 With the U.S. Supreme Court's action today refusing to grant a stay of the Alabama ruling striking down that state's gay marriage ban, judges in Alabama are seemingly trying to reprise the behavior of George Wallace as he stood in the school house door to bar black students from entering white schools (or "Massive Resistance" in Virginia where localities closed public schools rather than admit blacks).  Meanwhile, the recalcitrant judges are now facing possible lawsuits against them personally for refusing to follow the federal court orders.  And when one looks at the bigger picture - i.e., how the Supreme Court rules this June - it seems increasingly unlikely that the Court will uphold the 6th Circuit ruling upholding state marriage bans.  BuzzFeed has a good analysis that in particular looks at the whining dissent of Thomas and Scalia that seems to note that a pro-marriage equality majority controls the Court.  Here are article highlights:

The United States Supreme Court will end discrimination against same-sex couples this June — and even justices who oppose the coming decision appear to know it’s going to happen.

On Monday morning, Justice Clarence Thomas made explicit what had been growing apparent to observers for months: The court — at least a majority of the justices — has made up its mind on the issue of whether the U.S. Constitution bars states from treating same-sex couples differently than opposite-sex couples in marriage laws.

In denying the Alabama attorney general’s request to keep a U.S. district court order that strikes down Alabama’s ban on same-sex couples’ marriages on hold while the state appeals, the Supreme Court — even as it considers marriage cases out of four other states — made it clear that the justices will not stop same-sex couples from marrying in the meantime when a judge strikes down a ban.

Since October 2014, when the justices decided not to hear cases from five states where the appeals courts had struck down the bans as unconstitutional, the justices have denied requests to keep marriage rulings on hold during appeals.

Court observers, including BuzzFeed News, see these decisions as a signal of the court’s direction. But the court had given no reason for denying the stay requests — leaving people guessing.

Alabama Attorney General Luther Strange’s request, however, was the first stay application to reach the justices since they had agreed to hear the cases out of the 6th Circuit Court of Appeals. Some — including Strange and Alabama Gov. Robert Bentley — had hoped the court would treat stay requests differently now that it had taken up the issue.

On Monday morning, though, the court denied the request. Just by itself, the move would have been the strongest statement yet about where the court is headed on the ultimate question.

But Thomas brought the issue out into the open. He issued a statement, in which he was joined by Justice Antonin Scalia, explaining why they would have granted a stay to Alabama — the first word from a justice suggesting the expected end result in the matter.

In the short, three-page statement, Thomas criticized the court for “look[ing] the other way as yet another Federal District Judge casts aside state laws without making any effort to preserve the status quo pending the Court’s resolution of a constitutional question it left open in United States v. Windsor,” the 2013 decision striking down the Defense of Marriage Act’s ban on federal recognition of same-sex couples’ marriages.

“This acquiescence may well be seen as a signal of the Court’s intended resolution of that question,” he wrote, referring to the question of whether bans on marriage for same-sex couples are constitutional.
Given Thomas’ dissent today, the only real question left outstanding is where Chief Justice John Roberts and Justice Samuel Alito will end up on the ultimate question. Although both dissented in the Windsor DOMA decision, neither has joined Thomas and Scalia in saying publicly that they would have granted any of the recent stay requests.

Posted by Michael-in-Norfolk at Monday, February 09, 2015