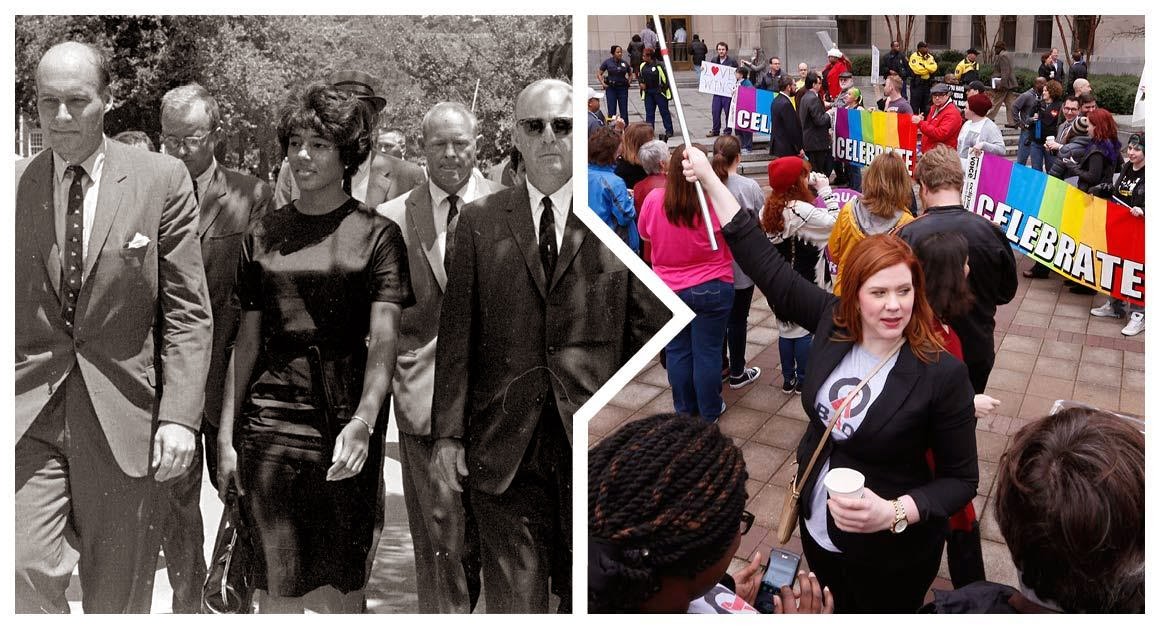 The turmoil roiling in Alabama as some state court judges are ignoring federal court rulings allowing same sex marriages to proceed is also setting up a problem for the GOP.  The recalcitrant judges are singing the same "states rights" song that the GOP has made its national anthem of late whenever its knuckle dragging, spittle flecked base seeks to torpedo federal programs or wants majority rule to determine the rights of gays, blacks, and anyone else the cretins and Christofascists deem as "other."  Now, the GOP may be about to see the mindset it helped foment bite it right in the ass.  A piece in Politico looks ate the looming problem that lunatics like Mike Huckabee and Rick Santorum try to fan the flames into a conflagration.  Here are article excerpts:


Alabama Chief Justice Roy Moore’s defiance of a federal court order on gay marriage is just the latest in a long line of bitter states’ rights fights on issues from school integration to the Confederate battle flag – and the latest potentially embarrassing political sideshow for the 2016 field of GOP presidential hopefuls.

In the end, some veteran Republican strategists suggest, Moore’s order barring county probate judges from issuing gay marriage licenses may serve mainly to harden the entrenched positions of supporters and opponents of a legal issue on which public opinion has been shifting with lightning speed, and which the Supreme Court seems likely to resolve by this summer.

Moore’s decision, however, increases the chances that Republican presidential candidates will be forced to discuss the issue — in the racially freighted framework of states’ rights, no less — before extremely conservative voters in the heat of a primary campaign.

“It’s really the same arguments that the Civil War pivoted on, from nullification to states’ rights and all this stuff,” said Bill Carrick, a longtime Democratic strategist and native South Carolinian with a vivid appreciation for his region’s folkways and resistance to change.

Almost 52 years ago, Alabama’s segregationist Democratic governor, George Wallace, drew worldwide publicity for his theatrical stand in the “schoolhouse door” against integration of the University of Alabama. But he knew his was a losing cause. John Kennedy federalized the Alabama National Guard and that was that.

More issued his order Sunday night, in defiance of a federal court ruling last month that Alabama’s statutory and constitutional bans on gay marriage are unconstitutional. The state is appealing that decision, but on Monday, the United States Supreme Court declined to extend a delay in its enforcement, and officials in Alabama’s more cosmopolitan quarters began issuing marriage licenses to gay couples.

The issue flies straight in the face of efforts by Republican Party chairman Reince Priebus to broaden the GOP’s appeal, if only because it also flies straight in the face of the most conservative elements of the party’s base. As Huckabee recently put it, asking some conservative Christians to accept gay marriage is akin to asking Jews to serve “bacon-wrapped shrimp in their deli.”

“There is a feeling of ‘Here we go again,’’’ consultant Carrick said. “Roy Moore’s trying to turn back the clock, which is his specialty. I don’t know what the party’s going to do about these guys. As hard as Reince Priebus tries to get the clown car out of the Republican parade, there’s always somebody who comes in in another one.”

The true solution for the GOP?  Kick the Christofascists out and send them into the political wilderness.  They need to become outcasts not given the time of day in polite society or in national political parties.
Posted by Michael-in-Norfolk at Monday, February 09, 2015

In some fairness to this POS, I have read that he does have some legal, albeit immoral justification for his position in that the court orders were directed at the executive branch of government in Alabama, not the judicial branch. But presumably adding him or one of his ilk as a party to the suit should bring him somewhat closer to the post-Appomatox world.