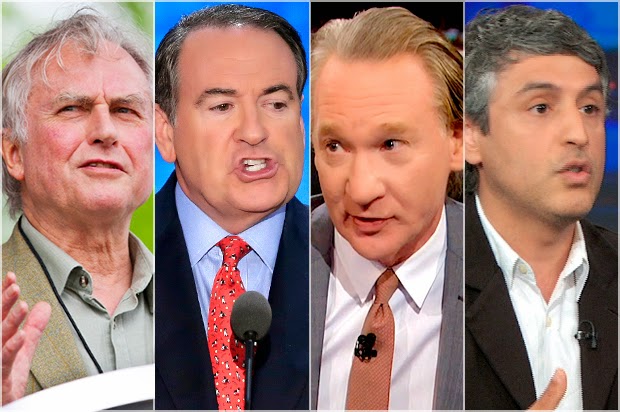 A post yesterday sought to tell some of the truth about the true, horrific history of Christianity that involves murder and mayhem on a huge scale.  Currently, we see constant deference toward and "tolerance" towards religion even though the "faithful" and "godly Christians" show little or no tolerance toward those of other faiths or no faith.  Meanwhile we see blathering liars engaging efforts to hide or rewrite the truth - e.g., the suggestion that Christianity had little to do with the Crusades even though the were conducted under Papal authority and many of the atrocities against the Cathars for instance were overseen by bishops and cardinals acting on orders from Rome. A piece in Salon makes the case that it is time to fight religion and tell the truth about its ugly fruits.  Here are highlights:

The relentless march of time generally affords humankind, which happens to include folks in the media, the chance to reflect on events and acquire wisdom. But the weeks passing since the massacre in Paris of the highly talented Charlie Hebdo cartoonists for their depictions of the Prophet Muhammad have only granted a good number of commentators the opportunity to bedork themselves time and again, . . .

Rarely have murderers so clearly manifested their motive. With the exclamations they made as they carried out their atrocity — “Allahu Akbar!” and “On a vengé le prophète Mohamed, on a tué Charlie Hebdo!” (The prophet Muhammad has been avenged, we have killed Charlie Hebdo!) — the attackers explicitly told us they were killing for Islam, and imparted precisely the lesson they intended: Do not insult or ridicule our faith or you will pay the supreme price. They wrought violence against innocents who dared transgress the commandments of a religion they did not profess. What’s more, they de facto succeeded in imposing sharia tenets well beyond the confines of the Islamic world.

Zogby’s is by far the most disgraceful, twisted, retrograde commentary on the Charlie Hebdo tragedy I have come across. Yet in adducing Pope Francis’ admonition to those who would insult faith, he unintentionally makes a point: Representatives of the world’s major religions usually stand together in calling for respect for their institutionalized fables, and they still, even now, usually get it. After all, respect, at least of a sort, is just what theocrats of old exacted, on pain of torture and death, when they ruled during the brutal millennium before the Renaissance that was once (and justly) known as the Dark Ages.

We are accustomed to reflexively deferring to “men of the cloth,” be they rabbis and priests or pastors and imams. In this we err, and err gravely. Those whose profession it is to spread misogynistic morals, debilitating sexual guilt, a hocus-pocus cosmogony, and tales of an enticing afterlife for which far too many are willing to die or kill, deserve the exact same “respect” we accord to shamans and sorcerers, alchemists and quacksalvers.

Out of misguided notions of “tolerance,” we avert our critical gaze from the blatant absurdities — parting seas, spontaneously igniting shrubbery, foodstuffs raining from the sky, virgin parturitions, garrulous slithering reptiles, airborne ungulates — proliferating throughout their “holy books.” We suffer, in the age of space travel, quantum theory and DNA decoding, the ridiculous superstitious notion of “holy books.”

And we countenance the nonsense term “Islamophobia,” banishing those who forthrightly voice their disagreements with the seventh-century faith to the land of bigots and racists; indeed, the portmanteau vogue word’s second component connotes something just short of mental illness.

The herd inclination of progressives to exculpate the canon of Islam and the role faith in general plays in inciting violence insults those with even a superficial knowledge of history. There is nothing commendable about covering up how religious convictions motivate killers, be they Christians (think of the Serbian Orthodox “cleansing” of Muslims in the Yugoslav war), Jews (recall Baruch Goldstein’s 1994 murder of 29 Palestinians at a Hebron holy site), Hindus (memorably, the Gujarat massacre in 2002 and, of course, the epochal Hindu-Muslim bloodshed accompanying Partition). Religion in each of these barbaric episodes (and many, many more) was the universally recognized primum mobile. Why should we not admit the same about the Charlie Hebdo slaughter?

This all leads us to an overarching issue of critical import. Adherence to any of the Abrahamic religions — that is, to the trumped-up doctrines of systematized, unverifiable fables mandating certain kinds of behavior and outlawing others — is, to repeat Kristof’s silly term, “otherizing,” or divisive, provocative, and ultimately inimical to social harmony. Traffickers in such fables, or those who provide cover to those who do, deserve to be disinvited from every forum convened to seek solutions to the problems they themselves have helped create.

We need to turn the tables and refuse to let the faith-based or their smooth-talking accomplices set the terms for debate; refuse to cower before the balderdash term Islamophobia; refuse to let faith-mongering fraudsters, from the Pope in the Vatican to the pastor down the street, educate our children or lecture us on morals or anything else. If we do not believe the Bible is true or the Quran inerrant, we need to say so, loudly, clearly and repeatedly, until the “sacred” sheen of these books wears off. And it will.

We need, after all, to tell the truth. If we don’t start doing this now, our next question must be, who among us will be the next victims?

Add the Mormons: not only the usual genocide to expropriate the native inhabitants of the western US, but the 1857 Mountain Meadows massacre.

I'm not sure that assigning demerits to religions on the basis of faith-inspired criminality does much good, but doing so certainly can't hurt. Religions are perhaps just best ignored except as historical phenomena or when they are inflicting obvious harm.