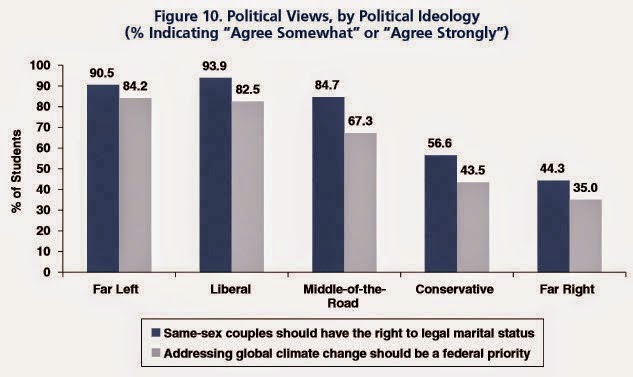 A new American Freshman Survey,  in which UCLA researchers polled over 150,000 incoming freshmen at 227 colleges and universities has good news or bad news depending upon one's perspective.  If you support equality and the removal of religion from public policy, the survey results are welcome news.  For the Christofascists and their political whore in the Republican Party, the findings ought to be setting off alarm bells .that their agenda is looking more and more like the Titanic at 11:36PM on the night of April 14, 1912.  The survey found that 27.5% of incoming freshmen (1st years at UVA) claimed no religious affiliation whatsoever.  Meanwhile, 81% support same sex marriage.  Here are some survey findings:

The CIRP Freshman Survey has consistently asked students to identify their religious preference since 1971, and more students than ever are selecting “none.” Figure 4 shows that, in 2014, more than one-quarter of incoming freshmen (27.5%) selected “none,” a one-year increase of 2.9 percentage points from 2013, and an increase of over 12 percentage points from the 1971 value (15.4%). . . . These numbers correspond with a recent Pew Research Center survey that found that 29% of Millennials are unaffiliated with any religion, which compares to 21% of Generation Xers, 16% of Baby Boomers, and 9% of the “Silent” Generation (Pew, 2014).

On gay marriage, the figures are even more devastating for the Christofascists/GOP:

The survey last asked about same-sex marriage in 2012. In the interim, support for same-sex couples having the legal right to marry has increased 6.5 percentage points to 81.5%. This increase covers a span of time where the U.S. Supreme Court struck down part of the federal Defense of Marriage Act and California’s state ban on same-sex marriage. Additionally, since these Supreme Court decisions, state-level same-sex marriage bans have fallen across the country in U.S. Circuit and District courts; as of January 2015, the U.S. Supreme Court has agreed to take up four pending cases from the Sixth Circuit Court of Appeals. Figure 10 breaks support for same-sex marriage down by political ideology. The findings show that only students who identify as “far right” do not support same-sex marriage. Just 44.3% of students identified as “far right” either “agreed somewhat” or “agreed strongly” that same-sex couples should have the legal right to marry. This figure contrasts with 56.6% of “conservative” students, 84.7% of “middle-of-the-road” students, 93.9% of “liberal” students, and 90.5% of “far left” students. It is clear that same-sex marriage is no longer an issue for the vast majority of entering college freshmen.


Posted by Michael-in-Norfolk at Saturday, February 07, 2015