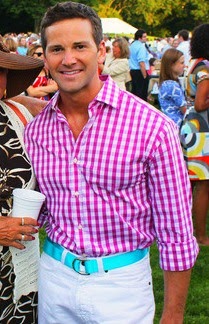 Michelle Bachmann's lisping, limp wrist husband "Marcia" Bachmann represents one type of closeted gay.  GOP Congressman Aaron Schock represents the gym rat, style conscious type who wants to always be the center of attention.   Now, with his "Downton Abbey" office makeover gift and a questionable real estate transaction that sounds like something Bob and Maureen McDonnell might have engaged in, Schiock is getting more attention than he wanted.  The New York Times looks at his growing problems, including his now former aid who compared blacks to escaped zoo animals.  Here are highlights:
WASHINGTON — Aaron Schock was 27 years old, a fresh-faced and ambitious Republican from Peoria, Ill., when he joined Congress in January 2009. Today, Representative Schock has earned a reputation — not for legislating, but for his ripped ab muscles, shirtless poses, racy Instagram account and, now, a Capitol Hill office decorated like a drawing room from “Downton Abbey.”

But Mr. Schock’s troubles may go deeper than the blood-red color of his freshly painted office walls.
The congressman confessed Friday that he has “had better weeks.” Monday brought mocking revelations in the Style section of The Washington Post that a firm named Euro Trash had donated the office makeover — complete with a crystal chandelier, gilded mirrors and a spray of pheasant feathers. A government watchdog group promptly demanded an ethics inquiry. The congressman, now 33, said he would pay for the work.

By Friday, Mr. Schock was denying accusations that he had sold his home in 2012 to a political donor for more than its market value.

This is not the first time Mr. Schock has drawn unwanted attention. In May 2012, an independent congressional ethics board found “substantial reason to believe” Mr. Schock violated federal law in soliciting a $25,000 donation to a political action committee. The House Ethics Committee investigated but took no formal action.

The questions about Mr. Schock’s real estate transaction, first raised by the liberal-leaning website Blue Nation Review, involve the 2012 sale of his home in Dunlap, Ill., to a company linked to a contributor, Gloria L. Bahaj, whose husband, Ali, is a former executive at Peoria-based Caterpillar, the construction equipment giant.

According to Peoria County Assessor records, Mr. Schock sold the property for $925,000; the real-estate website Zillow estimated at the time of the sale that the property was worth $819,000. Mr. Schock told reporters in Peoria on Friday that he had built the home on speculation before coming to Congress, that the transaction was handled by a real estate agent, that he had never spoken to the buyer and that the sale price was “right in line” with comparable homes in the neighborhood.

Since 2008, campaign finance records show, Ali and Gloria Bahaj and Caterpillar have donated a combined total of at least $191,035 to Mr. Schock and his political action committee, the GOP Generation Y Fund.

Posted by Michael-in-Norfolk at Saturday, February 07, 2015