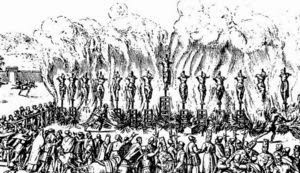 As the right wing noise machine and Christofascists who would like to impose their own version of Sharia law on all Americans continue to hyperventilate and engage in spittle flecked rants over Barack Obama's accurate description of religion's evil force throughout history, thankfully some media outlets are documenting the evil of religion and supporting Obama's words with historical fact.  Those literate in history are less likely to fall prey to Christianist propaganda which is precisely why Christianist efforts to rewrite history in school text books must be strenuously opposed.  One should also be mindful that ancient Rome was tolerant of numerous religions - it was the Christians who sought to wipe out all differing religious beliefs and traditions.  And the Christians began this process long before the Koran and Islam appeared.  A piece in The Atlantic looks at some true history of what has been done in the name of religion right here in America that the "godly folk" would prefer the public not know or remember.  Here are excerpts:

People who wonder why the president does not talk more about race would do well to examine the recent blow-up over his speech at the National Prayer Breakfast. Inveighing against the barbarism of ISIS, the president pointed out that it would be foolish to blame Islam, at large, for its atrocities. To make this point he noted that using religion to brutalize other people is neither a Muslim invention nor, in America, a foreign one:


The "all too often" could just as well be "almost always." There were a fair number of pretexts given for slavery and Jim Crow, but Christianity provided the moral justification. On the cusp of plunging his country into a war that would cost some 750,000 lives, Confederate Vice President Alexander Stephens paused to offer some explanation. His justification was not secular. The Confederacy was to be:

[T]he first government ever instituted upon the principles in strict conformity to nature, and the ordination of Providence, in furnishing the materials of human society ... With us, all of the white race, however high or low, rich or poor, are equal in the eye of the law. Not so with the negro. Subordination is his place. He, by nature, or by the curse against Canaan, is fitted for that condition which he occupies in our system. . . .

Stephens went on to argue that the "Christianization of the barbarous tribes of Africa" could only be accomplished through enslavement. And enslavement was not made possible through Robert's Rules of Order, but through a 250-year reign of mass torture, industrialized murder, and normalized rape—tactics which ISIS would find familiar. Its moral justification was not "because I said so," it was "Providence," "the curse against Canaan," "the Creator," "and Christianization." In just five years, 750,000 Americans died because of this peculiar mission of "Christianization." Many more died before, and many more died after. In his "Segregation Now" speech, George Wallace invokes God 27 times and calls the federal government opposing him "a system that is the very opposite of Christ."

The interest in power is almost always accompanied by the need to sanctify that power. That is what the Muslims terrorists in ISIS are seeking to do today, and that is what Christian enslavers and Christian terrorists did for the lion's share of American history.

Pointing out that Americans have done, on their own soil, in the name of their own God, something similar to what ISIS is doing now does not make ISIS any less barbaric, or any more correct. That is unless you view the entire discussion as a kind of religious one-upmanship, in which the goal is to prove that Christianity is "the awesomest."

If you are truly appalled by the brutality of ISIS, then a wise and essential step is understanding the lure of brutality, and recalling how easily your own society can be, and how often it has been, pulled over the brink.


As I noted in a post last October about religion's ugly history beyond America's borders throughout history:


Throughout history religion has unleashed untold hate, misery and bloodshed.   Yes, some religious groups engage in charitable works, but even then many engage in proselytizing at the same time.  It's always about winning others over to their belief systems and often punishing those who don't yield - e.g., the Salvation Army's anti-gay policies and past rejection of gays needing shelter.  Meanwhile, we see ISIS demonstrating just how evil fundamentalist religion can be even as anti-Muslim Christians forget Christianity's own ugly past that has included the Inquisition, the extermination of the Cathars in France and many other acts of genocide against those deemed to hold heretical beliefs.  Yet despite this horrible track record we still see apologist defending religion . . .

For those unfamiliar with the Cathars, here how the Catholic Church dealth with them: between 15,000 and 20,000 were slaughters in the French city of Béziers alone and 140 burned at the stake in city of Minerve; and here's a contemporary account of a massacre carried out  in 1219 at Marmonde, a town of some 7000 people:


…terror and massacre began. Noblemen, ladies and their little children, men and women stripped naked, all were slashed and cut to ribbons by keen edged swords. Flesh, blood, brains, torsos, limbs and faces hacked in two; lungs, livers and guts torn out and thrown away - laying on the open ground as if they had rained down from the heavens. Marshland and firm ground, all was red with blood. Not a man or woman was left alive, neither young nor old, no living creature, except perhaps some well-hidden infant. Marmond was razed and set alight…


To this death toll - which some estimated totaled 500,000 in France - one must add the "old believers" in Russia, and those across the Mediterranean region who were labeled heretics.  A lengthy compilation of the atrocities can be viewed here.  This is a sample of the fate these individuals suffered in the name of God:

Anyone in Villaro who declined to go to a Roman Catholic mass was liable to be crucified upside down, but there was some variation in the manner of killing in other towns. Some were maimed and left to die of starvation, some had strips of flesh cut off their bodies until they bled to death, some were stoned, some impaled alive upon stakes or hooks. Some were dragged along the ground until there flesh was scraped away. One at least was literally minced. Daniel Rambaut had his toes and fingers cut off in sections: one joint being amputated each day in an attempt to make him recant and accept the Roman faith. Some had their mouths stuffed with gun-powder which was then ignited. Paolo Garnier of Roras was castrated, then skinned alive. Children were killed in various ways before the eyes of their parents. Those few who escaped to the mountains were mostly killed by exposure, starvation or disease.

ISIS and Islam have nothing on Christianity!
Posted by Michael-in-Norfolk at Saturday, February 07, 2015

Email ThisBlogThis!Share to TwitterShare to FacebookShare to Pinterest
Labels: apologists for religion, atrocities, Barack Obama, Cathars, Christianity as an evil, heretics, murder of children, religion as a justification for evil