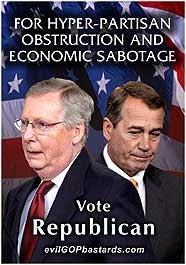 Today, Barack Obama will release his proposed budget.  A budget that the GOP obstructionists will say is "DOA" - dead on arrival.  In terms of actually being adopted, the GOP obstructionists may be right, but that doesn't mean the proposed budget won't have a strong political role that will live on.  If the GOP rejects the proposals, then - God forbid - the Congressional Republicans will have to submit a counter proposal that will show their hand to voters.  It's easy to just say "no," but fashioning something that can be passed and survive a veto threat is something all together different.  A column in the Washington Post looks at this reality.  Here are excerpts:

When President Obama releases his budget Monday, the words “dead on arrival” will be widely incanted because they are part of a quasi-religious Beltway ritual.  This year, those words will be misleading.

No one expects Obama’s budget to be enacted as he proposes it. Republicans responded even to early outlines of his plan with a wall of opposition. But this time around is different because, paradoxically perhaps, the fact that Republicans control both the House and Senate makes Obama’s role more rather than less important.

Now, Obama’s plan will be the main public alternative to whatever the Republicans decide to do.

Moreover, the Republicans are responsible for passing a budget through two houses of Congress, so differences within the GOP that could be finessed in the past will have to be dealt with openly.

The most obvious will be on whether to continue cuts in the defense budget prescribed under the so-called sequester enacted in 2011. GOP defense advocates want to raise Pentagon spending substantially, libertarians want to keep both domestic and military spending low, and many mainstream conservatives will try to cut domestic spending even more to accommodate defense increases.

Obama has declined to offer premature concessions to the Republicans in his own proposal, which further clarifies the stakes. At the same time, he has made things trickier still for his opponents by putting many of his ideas in a form that Republicans have supported in the past. That’s true even of some of his tax proposals.

The president will call this bluff by putting $1.8 trillion in long-term deficit reduction on the table. But most of it will come on the revenue side. His argument here is straightforward: The bulk of the deficit reduction in the deals reached since 2011 has come from cuts in discretionary spending — that is, almost everything except the big retirement programs — which is now at its lowest level, as a share of gross domestic product, in decades.

The deficit hawks who aren’t part of the ideological assault on the public sector know that the basic functions of government have already been cut too much and that some new domestic spending, particularly for infrastructure, is essential.

[T]he biggest challenge to Republicans may be whether they are willing to go along with Obama on ideas that are plainly in their wheelhouse. One small but significant hope: Rep. Paul Ryan (R-Wis.) and Sen. Patty Murray (D-Wash.) have been pushing the idea that we need more evidence-based policy making, and Obama is joining their campaign.

Republicans have tried hard to tout their concern about income stagnation and an increasingly frozen class structure. Obama will be pushing for a new initiative, “The Upward Mobility Project,” to provide more flexibility to local officials in a set of government programs if they can show how their efforts will help people climb occupational and income ladders. Projects of this sort are exactly what we should be thinking about.

Obama’s opening bid ought to be the start of a back-to-basics debate — an argument that will extend into the 2016 campaign — over what we want government to do and how we propose to pay for it.

Posted by Michael-in-Norfolk at Monday, February 02, 2015