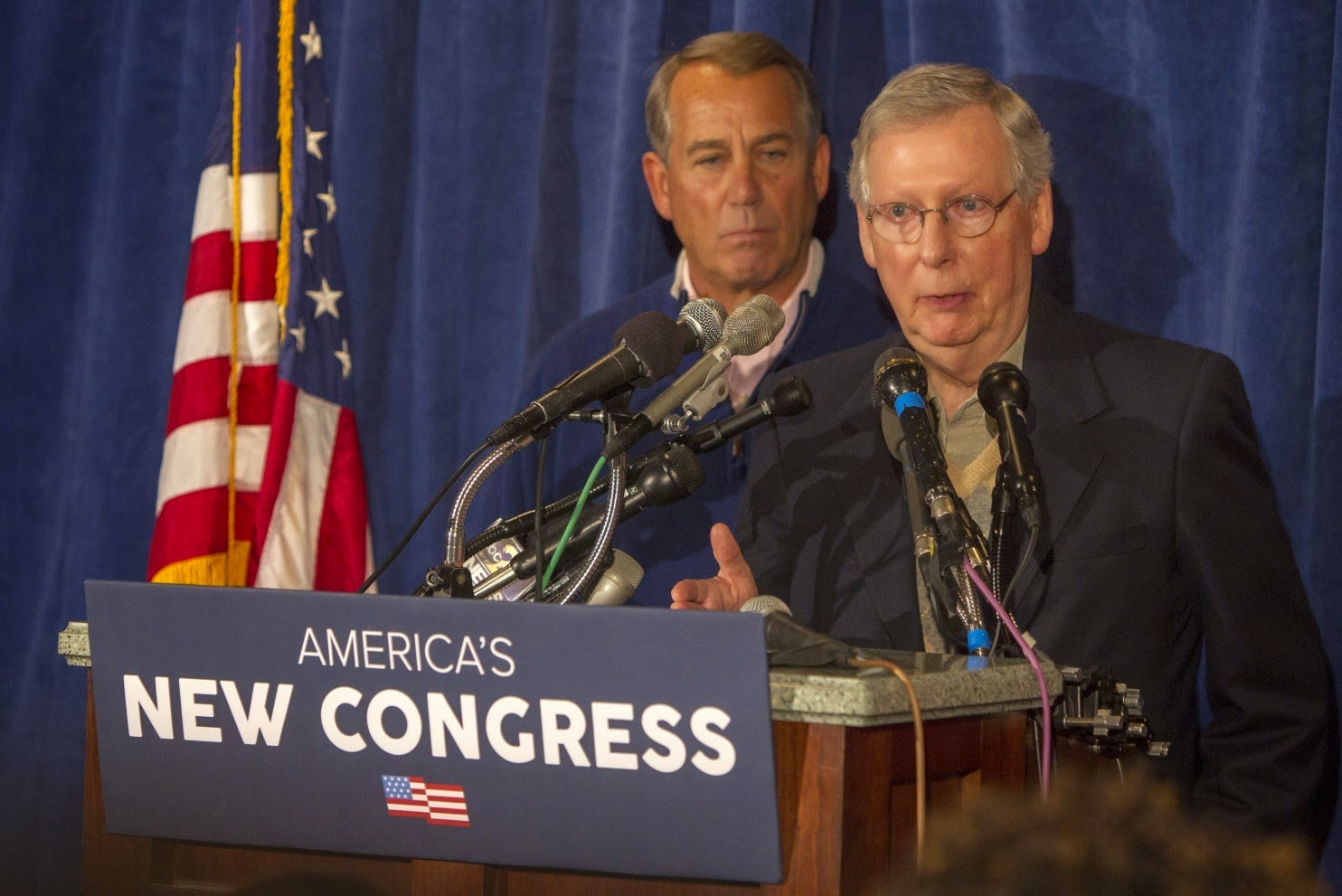 Remember how Congressional Republicans boasted in the wake of the 2014 midterm elections tat they would show the nation how they could competently govern?  Like so much in today's GOP, that claim is proving to have been a fantasy in the minds of the seemingly lobotomized Republican circles.   Other than voting yet again to repeal "Obamacare" in the House, not much has been accomplished.  The GOP has tripped up on its own extreme abortion bill after even some Republicans concluded it was "too extreme."  Now, as a second act, the Congressional Republicans are about to defund Homeland Security as "conservatives" - think racists - want to hold back funding to stop Barack Obama's immigration executive order.  Leaving the country open to terror attacks is less important than keeping more Hispanics from remaining in the country.  A column in the Washington Post looks at the lunacy.  Here are excerpts:

Bang. Bang. Crash. That was the sound of the Republican majority in Congress shooting itself in both feet, then tripping over them.

At a moment of heightened concern that terrorists in the Middle East might stage or inspire attacks on U.S. soil, the GOP-controlled House and Senate are unable to agree on a bill to fund the Department of Homeland Security. If the party’s aim is to show Americans it is ready to govern, we are witnessing an epic fail.

Rather than ensure the smooth operation of the agency charged with keeping the nation safe, Republicans would rather argue about a separate issue — immigration — and struggle over tactics for tilting at windmills. Meanwhile, a Feb. 27 deadline for passing an appropriations bill draws near. “I don’t believe we should shut down the Department of Homeland Security, given the threats that are obviously out there and the attacks on America,” Sen. John McCain (R-Ariz.) said Wednesday. But too few in his party are listening.

Republican conservatives want to use the Homeland Security funding bill to reverse President Obama’s executive actions allowing millions of undocumented immigrants to stay without fear of deportation. A measure stripping out money to fund Obama’s initiatives easily passed the House, with its massive GOP majority and streamlined procedural rules. But the Senate is a different story.

It was obvious from the beginning that Majority Leader Mitch McConnell (R-Ky.) did not have the 60 votes needed to get the bill through the Senate. Nevertheless, McConnell has dutifully brought the bill up three times. . . .

“Isn’t that the definition of insanity? Voting for the same bill over and over again?” McCain asked.

Indeed, the whole episode does seem pretty insane. House Speaker John Boehner (R-Ohio) knew the bill he sent to the Senate would be dead on arrival. McConnell knew he didn’t have the votes to pass it.

Boehner and McConnell appear to be trying to teach House Republicans a lesson in basic arithmetic. The class, however, is busy throwing spitballs.

The GOP majority in the House continues to value symbolic posturing over pragmatic action.


Let’s see, what else have Republicans achieved since taking control of both chambers? Well, the House tried to pass a bill banning abortion after 20 weeks of pregnancy but had to pull the legislation at the last minute over a requirement that rape victims report their assault to police before qualifying for an exemption. Republicans did manage to pass a bill authorizing the building of the Keystone XL pipeline, but Obama promises a veto and the GOP doesn’t have the votes to override him.

If this is the pattern, it’s going to be a long couple of years.

Posted by Michael-in-Norfolk at Friday, February 06, 2015