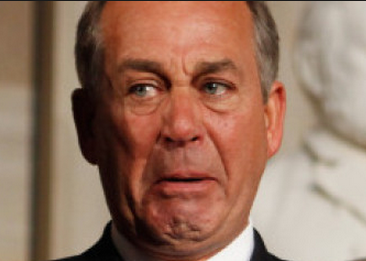 I cannot say that I feel any sympathy for John Boehner.  The man is, in my opinion, a douche bag (and that's being kind).  That said, Boehner today stated that, if the U.S. Supreme Court, issues a ruling confirming gay marriage nationwide, he believes the House GOP will accept the ruling.   Part of Boehner's statement is based on the reality that there really would be little or nothing that the House GOP could do other than take symbolic votes to pass a proposed anti-gay amendment to the U.S. Constitution which would never see passage.  Nonetheless, I can already hear the howls and imagine the spittle flying in the office of hate groups like FRC, The Family Foundation here in Virginia, and the lunatic Traditional Values Coalition.  The New York Times looks at Boehner's apparent capitulation.  Here are excerpts:

Speaker John A. Boehner said on Thursday that he expected House Republicans to accept the decision on same-sex marriage that the Supreme Court is scheduled to issue later this year.

“I don’t expect that we’re going to weigh in on this,” Mr. Boehner said. “The court will make its decision, and that’s why they’re there, to be the highest court in the land.”

The statement comes as a bit of a surprise, given the House Republicans’ expensive defense of the Defense of Marriage Act in 2013.

Evan Wolfson, president of the LGBT group Freedom to Marry, said House Republicans made a “commendable decision” not to participate in the marriage cases this time around and called it “a real step forward” after defending DOMA in court.

“Their evolution reflects the momentum for the freedom to marry nationwide, as well as the quiet hope of most Republican officials and operatives that the Supreme Court will rule in our favor and bring the country to national resolution, thereby rescuing them from their prior stance against the freedom to marry,” Wolfson said. “They know their past pandering to part of their base is way out of step not only with a majority of the American people and independents, but with Republicans under 50 and even with young Evangelicals.”

Outgoing U.S. Attorney General Eric Holder has already said the Obama administration will file a brief in the case arguing on behalf of marriage rights “for all Americans.”

Posted by Michael-in-Norfolk at Thursday, February 05, 2015