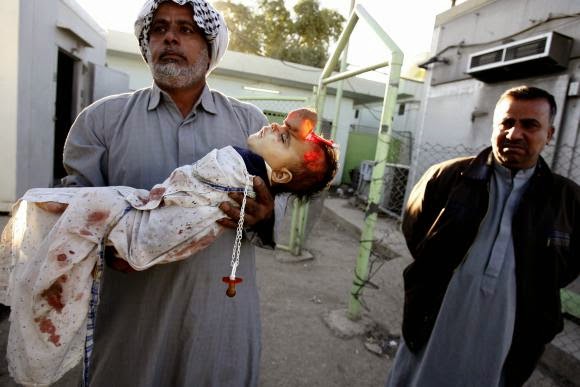 While the film "American Sniper" continues to rake in money and tell a false version of the Iraq War - one might think Dick Cheney himself wrote the script - thankfully many are coming forward to condemn the film and the lies it promotes.  Sadly, too few of those who see the "war porn" film will hear the real truth of the horrors done by America and individuals like the late Chris Kyle.  In many ways, Kyle was just as immoral as the ISIS extremists who seem unable to see the common humanity of others.  A piece in Salon has the thoughts of another American sniper who condemns the film in no uncertain terms.  Here are excepts:

Hearing Garett Reppenhagen describe how he felt the first time he shot someone is like listening to an addict talk about his first time injecting heroin. “I leveled my M-4, put him in my iron sights, and took three shots. One of them hit him center mass and he went down in the middle of the road. I had this instant sense of satisfaction, overwhelming excitement and pride. It was really kind of an ecstatic feeling that I had.”

Garett has a lot in common with Chris Kyle. Both entered the military at an older age; both spent endless hours on rooftops, in windows or in trash piles in Iraq, “doing their job”; both were in Iraq in 2004 hunting al-Qaida leader Abu Musab al-Zarqawi; and both spent time after active duty trying to help veterans.  The similarities end there.

[O]ur invasion and occupation of Iraq was not a “kill them or they will kill us” scenario. History has borne that fact out, and that lack of context makes “American Sniper” a dangerous film.

Dangerous because kids will sign up for the military because of this movie. Dangerous because our leaders have plans for those kids. Some will kill. Some will be killed. Or worse. There is no narrative existing outside the strict confines of “American Sniper’s” iron sights that allows for the war on terror to be over. It’s like a broken record looping over and over: attack, blowback and attack. Repeat.

Garett wonders about the mothers of those we killed in Iraq. What aspirations were dashed when an occupying force killed their children, for whom they invested so much of their lives?

He did not keep track of his kills and he hates that I ask him for a number. “I wasn’t keeping track and oftentimes there was no confirmation. I feel it didn’t make me a better soldier and certainly doesn’t make me more of a man.

Garett came home and began speaking out. He still does, in fact.  “I do antiwar talks in high schools and colleges. I stopped telling war stories at these events because no matter how bad and awful it sounds, you can still see the look in kids’ eyes that say, ‘That is the rite of passage, that is how I become a man. I have to go there and live through that horrible shit to know that I am an adult.’”

A lot of people were fighting us because they did not want to be occupied or because they had family members who were hurt or killed and they wanted to get some sort of vengeance. By the end of my tour, it was really hard to justify killing them. We should not have been there in the first place.”

My recovery hinged on the fact that I felt guilt and shame over committing atrocities against an occupied country. We went over there and brutalized and oppressed, and that is part of my psychological and moral injuries. If I can’t talk about it at the VA, then the VA can’t help me.”

Garett’s views are “political,” but the worldview of Chris Kyle as brought to life in “American Sniper” is not. It may be true that it is good for box office for the creators of “American Sniper” to pretend that their movie is not a political one, but if Cooper and Eastwood actually believe that, any narrative not draped in yellow ribbons and billowing red, white and blue flags cannot penetrate the cloak of white imperial privilege they have pulled over their heads.

We are living through a moment in time where a perverse experiment has gone wrong and led to the creation of an out-of-control monster. In this case, the monster itself is the blowback-inducing, homicidal bull in cultural, religious and geopolitical china shops that has been U.S. foreign policy for at least the past 75 years. That concept, personified, is the myth of Chris Kyle that is breaking box office records and marching toward the Oscars with all of the pomp, precision and sense of a rightful place at the head of the line displayed by the Marine Corps Marching Band at the Rose Bowl Parade.

In addition to the outright lies (weapons of mass destruction, a connection between Iraq and 9/11, etc.), the main ingredient of this nightmare is the belief in American exceptionalism: the wind beneath the wings of the 19th century concept of Manifest Destiny. The offspring of that concept, we can call it Manifest Destiny’s child, is a privileged, spoiled, brutal bully on the world stage.

That Chris Kyle, nurtured as he was by the insidious worldview of Manifest Destiny’s child, turned out the way he did makes him common.

Posted by Michael-in-Norfolk at Friday, February 06, 2015