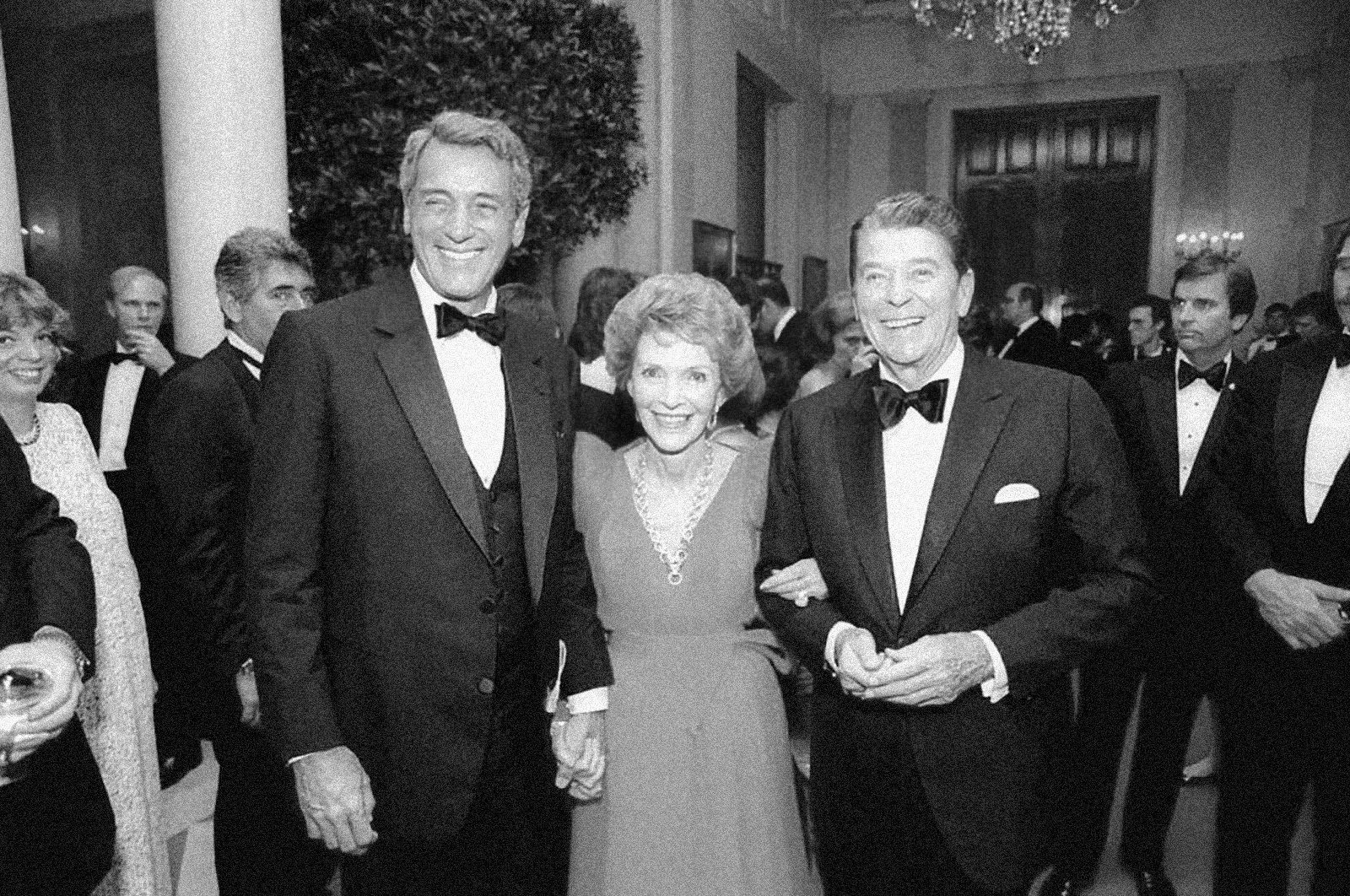 Anti-gay bigotry isn't anything new with the Republican Party.  Sadly, it has been the party norm for decades and as a well documented new story at BuzzFeed illustrates, even prominent Republicans are only too willing to throw friends who are gays under the bus rather than offend the sensibilities of the foul Christofascists within the ranks of the party base.  A case in point? Nancy Reagan and Ronald Reagan who refused to take any action to help actor friend Rock Hudson to secure an experimental treatment as he was dying.  With "friends" like the Reagans, one seemingly doesn't need enemies.  Here are some article excerpts (read the entire piece):

On a Sunday evening in July 1985, just hours after arriving in Paris from Los Angeles, Rock Hudson collapsed shortly after checking into the famed Ritz hotel.

The 59-year-old actor was once one of Hollywood’s hottest stars throughout the 1950s and ’60s, seen as the embodiment of “the American man” — tall, dark, and handsome. A constant fixture on the big screen, he starred alongside leading actresses like Elizabeth Taylor in Giant — netting an Oscar nomination for the role — and Doris Day in a series of popular romantic comedies.

By the mid-1980s, though, while still close with many from Hollywood’s golden era like Day and friendly with Ronald Reagan, another actor of the era and now the president of the United States, and his wife, Nancy Reagan, Hudson was no longer the broad-shouldered icon. He was frail, ill — the airline almost refused to let him board the nonstop flight to France.

Hudson was dying from complications related to AIDS.   Although only a handful of people knew it, Hudson was in Paris desperately seeking treatment for AIDS — treatment that even a prominent, wealthy actor could not get in the United States in 1985.

Although more than 5,500 people had died from the disease by the start of 1985, the government had taken few significant steps toward addressing the disease — with the Reagan administration recommending a $10 million cut in AIDS spending down to $86 million in its federal budget proposal released in February 1985.

Over the following days, the pair, along with Hudson’s American publicist, Dale Olson, tried everything in a desperate attempt to get the dying actor moved to the military hospital for treatment.

These 10 days changed the course of history, as the world learned that Hudson was gay — and why he was dying.

“AIDS was on the front page of virtually every Sunday morning paper in the United States,” Randy Shilts wrote of the Sunday that followed Hudson’s collapse and revelations in his epic coverage of the epidemic, And the Band Played On. The revelations changed the course of AIDS coverage — and the broader attention paid to the disease. Hudson’s death a few months later, on Oct. 2, 1985, made him the first high-profile celebrity death from AIDS that was openly acknowledged as such.

One key part of this story, though, has never been told until now — not discussed at the time and lost in piles of paperwork from the Reagan administration. As Hudson lay deathly ill in the hospital, his publicist, Olson, sent a desperate telegram to the Reagan White House pleading for help with the transfer.

“Only one hospital in the world can offer necessary medical treatment to save life of Rock Hudson or at least alleviate his illness,” Olson wrote. Although the commanding officer had denied Hudson admission to the French military hospital initially, Olson wrote that they believed “a request from the White House … would change his mind.”

The telegram, along with the documents detailing the White House’s response, were initially discovered by a new project focused on “archives activism” that is based out of D.C.

Charles Francis, the president of the newly reconstituted Mattachine Society of Washington, D.C., provided the documents to BuzzFeed News after the group — with support from the law firm of McDermott, Will & Emery — obtained them from the Reagan Presidential Library. BuzzFeed News confirmed the documents’ authenticity with archivists from the Reagan Presidential Library.

“The view was, ‘Well, we’re so sorry’ — and she was, they were both very sorry for Rock’s condition and felt for him and all the people — but it just wasn’t something that the White House felt that they could do something different for him than they would do for anybody else,” Weinberg said.

“Seems strange that the Reagans used that excuse, since they often did favors for their Hollywood friends during their White House years,” Staley told BuzzFeed News, pointing out a time when President Reagan personally intervened to assist a fundraising effort led by Bob Hope, as detailed in a biography of the entertainer. “I’m sure if it had been Bob Hope in that hospital with some rare, incurable cancer, Air Force One would have been dispatched to help save him. There’s no getting around the fact that they left Rock Hudson out to dry. As soon as he had that frightening homosexual disease, he became as unwanted and ignored as the rest of us.”


I have always viewed Nancy Reagan as a cold bitch.  It seems I war more correct than I knew.

Posted by Michael-in-Norfolk at Wednesday, February 04, 2015