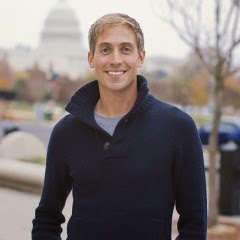 Last week was not a good week for presumed to be gay GOP Congressman Aaron Schock.  Between the racists Facebook posts by his now former aide and ethics investigations concerning gifts and the questionable sale of his home to campaign contributors, the bad PR was nonstop.  This week is shaping up to be not much better.  Wonkette is having a field day about Schock's boy toy personal photographer - Jonathon Link (pictured above) - who seemingly travels with Schock everywhere.  Here are tongue in check highlights:

My goodness, America’s Top Heterosexual Congresscritter is in the news so much lately! We’ve gone from Not Gay Downton Abbey office to gayest ethics complaint ever to racist spokesgoon having to resign for being racist spokesgoon, all in the space of a week, and apparently Aaron is not done Shaking It Off, because here comes more!

Politico decided that it needed to win some mornings, so they did their own profile of the congressman from Illinois, focusing on the things he spends his taxpayer and campaign moneys on, and MOSTLY we don’t learn anything we didn’t already know from looking at Aaron’s Instagram account — he takes a lot of trips, likes being naked — but there is one scoop we find very interesting, and that scoop’s name is Jonathon with an ‘O’, and he is Aaron’s Personal Photographer:


To keep track of all his comings and goings, Schock has hired a personal photographer. Jonathon Link, a former Dallas-area wedding photographer, now snaps shots for Schock, and both his campaign and taxpayers pick up the bill.

Aaron’s remaining, presumably non-racist spokesgoons say it’s totally normal to do this, because Aaron is the biggest fundraiser ever, and apparently having a Jonathon around helps him bring in the big bucks:


Schock aides defended employing a full-time photographer; “what is spent on photographers is in line with what is raised as a result.”

FULL TIME. To be fair, though, maybe his Jonathon is a Jack Of All Trades, always ready to lend a hand with whatever needs to be done, you know, at the office or on vacation in Argentina or wherever, because really, Aaron goes A LOT of places, all of them essential to the well-being of taxpayers in Peoria, Illinois

It is also very interesting that Jonathon is referred to by the Politico as a “former” wedding photographer. His website appears to be up and running, and when you load it, it doesn’t give you a “404 ran off with congressman LOL” error, but maybe he’s too busy taking pictures of Aaron to get on the computer these days.

We don’t know if Aaron also has to buy a separate hotel room for Jonathon every single time, but we’re guessing that, since Aaron is a fiscal conservative, probably not, that’s wasteful.

Oh, also, Aaron has another ethics complaint to contend with, concerning the sale of his Peoria home for $925,000, to a political donor. SOME SAY that the purchase price was FAR above market value, which, if true, would basically be like a big, illegal, unreported donation. . . . Maybe the donor and Aaron were taking shirtless selfies together and Aaron said, “I need to sell my house,” and the donor was like “I want it,” and it was just one of those right time, right place things. Or maybe it was FRAUD STUFF.

Time will tell on that ethics complaint, of course, but maybe that’s where he got the money to bring Jonathon Onto His Staff, haw haw, get it?

Wonkette is definitely maintaining the tradition started by founder, Ana Marie Cox!  Love it!
Posted by Michael-in-Norfolk at Tuesday, February 10, 2015