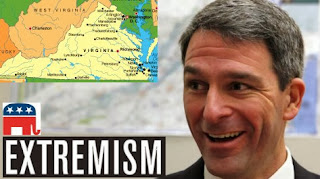 Ken Cuccinelli lives in a fantasy world dominated by religious extremists like his masters at The Family Foundation and knuckle dragging Tea Party cretins (many of whom likewise fall into the Christianist camp).  Being surrounded by Kool-Aid drinkers and speaking to crowds of spittle flecked far right racists and bigots - which is what the GOP base has become - Cuccinelli does not grasp that Virginia has changed over the last decade or two.  Yes, areas in Southwest Virginia remains a fetid swamp locked in the past where racism, gay bashing and anti-minority bigotry are still socially acceptable.  But other parts of the state - the parts with the larger population base - have changed.  Even Hampton Roads has become more modern in its outlook, at least in relative terms.  A column in the National Journal takes Cuccinelli to task for failing to see this new Virginia.  Here are highlights:


Can a hardline conservative still win a governor's race in Virginia? Demographics suggest those days are gone.

Republican Ken Cuccinelli has acted on his passions and convictions throughout his political career, and that's now creating challenges for him in a state that's gone through profound changes for more than a decade. In a dyspeptic campaign between two flawed candidates, former national Democratic chairman Terry McAuliffe's positions are more in tune with the state's diverse, swelling population centers – and that could make the difference.

When Cuccinelli won a special election to the state Senate in 2002, Northern Virginia was at the start of an explosive decade of growth that transformed its people and politics. The four-county, suburban Washington region accounted for more than half of the state's growth from 2000 to 2010, as professionals and minorities flooded in. One third of the state now lives in Northern Virginia, and most of the rest live in the Richmond and Norfolk areas.

Diversity, meanwhile, has skyrocketed. The state Hispanic population nearly doubled over the period, and there was a 63 percent increase in mixed-race residents. The politics have evolved as you would expect, culminating in President Obama's landmark 2008 and 2012 victories in Virginia, powered by the Northern Virginia counties of Arlington, Fairfax, Loudoun, and Prince William.

It was always hard to see how Cuccinelli would hold his own among the suburban liberals and moderates in the region, particularly women, given his lawsuits against the Affordable Care Act and a climate scientist at the University of Virginia; his attempts to make divorce more difficult; and his opposition to gay rights, abortion rights, immigration reform, the new health law's Medicaid expansion, and a bipartisan plan to ease the terrible traffic that threatens to cramp growth in Northern Virginia.

McAuliffe's pollster, Geoffrey Garin, says Cuccinelli is "losing white moderates overwhelmingly" because he has "deliberately vacated any claim to the center." The campaign is pressing that point in TV ads on abortion and divorce that ask why Cuccinelli wants to interfere in people's lives. The tactic is working, judging by McAuliffe's double-digit leads over Cuccinelli among women in polls this month.

Cuccinelli also has watched a number of prominent Republican figures endorse his opponent. "These are the cards that he dealt himself;. . . .

New fodder for base-revving arrived recently in the form of proposed new federal regulations on coal plants. Cuccinelli and his allies immediately greeted them as a revival of the "war on coal" they say is being waged by Obama, McAuliffe, and Democrats. A Cuccinelli TV ad says it's also " a war on the working poor, our livelihood." But Virginia's coal mines are located in three southwest counties with a total population of about 82,000 compared with more than 2 million who live in Northern Virginia – so not that many people are affected. In fact, says McDonald, "those coal regions actually lost population over the last decade, they didn't gain it." Nor is McAuliffe leaving the coalfields to Cuccinelli. He is trying to cut into the Republican's support there with an ad highlighting a probe into whether Cuccinelli's office improperly helped energy companies in a fight against local landowners, and another featuring one of the landowners.

"The big question is whether Virginia has reached a tipping point," says Dustin Cable, a demographics researcher at the University of Virginia. If a candidate with as many problems as McAuliffe can win, the answer will be emphatically yes.

Cuccinelli - and for that matter "Bishop" Jackson and Mark Obenshain as well - are the dream candidates of the theocrats and extremists at The Family Foundation.  All three need to be decisively defeated to send the message that The Family Foundation and its message of religious extremism, hate and bigotry are now radioactive with voters.  Victoria Cobb and similar hate merchants need to be booted out of the GOP permanently.