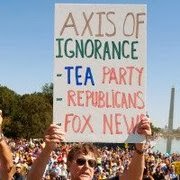 It seems that Kathleen Parker has once again sworn of Christofascists/Tea Party Kool-Aid at least for long enough to once again see reality and slam the House GOP for it hell bent effort to force a government shut down and tank the U.S. economy yet again.  Parker recognizes that if the House GOP saboteurs prevail, it will be the GOP, not Obama and the Democrats who will ultimately lose.  Only time will tell how long Parker will eschew the mind altering Kool-Aid of the increasingly insane party base.  Would that more once rational Republicans - or at least those few who have not fled the GOP - would do likewise (yes Karen, I'm talking about you). Here are highlights from Parker's take down of the GOP extremists in the Washington Post:

Ask most people on Capitol Hill and they’ll say: 50-50. Those are the odds they give for a government shutdown.

An alternative to the shutdown would be a proposed delay of the individual mandate, the most painful part of Obamacare, which may seem like a Republican victory but on closer inspection would be a win for President Obama and Democrats.

Historians — or commentators, in the meantime — might view either of these possible outcomes as yet another “Putinesca” victory for the president: Saved by the enemy.

Just as Russian President Vladimir Putin emerged at the brink of the U.S. bombing of Syria to orchestrate an alternative solution, Republicans may have provided a rip cord for Obama.

Here’s the problem for Republicans, which will not be news to those with a view of the long game. The short game is to stall Obamacare, but to what end ultimately? Until Republicans can seize the Senate in 2014 and the White House in 2016, at which point they can repeal the whole thing?  Skinny chance, that.

More likely, whether the government shuts down or, should Tinker Bell suddenly materialize and persuade Obama to cave and postpone his personal dream act, Republicans will be viewed by a greater majority than previously as having no talent for leadership.

And if the debt ceiling isn’t raised and the United States defaults, threatening our full faith and credit around the world and sending countries looking favorably for other currencies, not to mention the financial fallout here, then blame will fall at the feet of the Republican Party. No surprise there.

Now consider the alternative scenario: Suppose Republicans succeed in getting the individual mandate delayed for a year — right up to the 2014 midterm elections. Bravo, right? Not necessarily. If voters don’t have to experience the uncertainty and discomfort of being forced to buy insurance in an unwieldy, dysfunctional system — all the while noticing that millions are still without coverage — who benefits?

Surely not the Republicans, who, on the one hand, can be blamed for depriving insurance coverage to those poor sick kittens and ducklings. On the other, they accrue no benefit from having prevented the pain of implementing Obamacare.

Alternatives to present circumstances do not abound. Republicans have drawn their line in the sand.   . . . . Republicans, who will have banished themselves to wander a while longer in the desert, may have drawn a line too far.

Obviously, the reality denying and ignorance embracing GOP base will accuse Parker of being a "sell out."  But, sometimes being responsible is trying to tell the deranged that they need to rethink their demands and actions.  Even if one's efforts fall on deaf ears.

Posted by Michael-in-Norfolk at Saturday, September 28, 2013