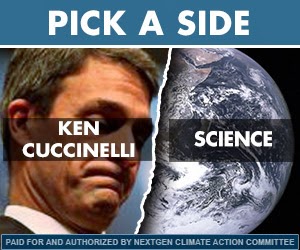 Everything from advances in longevity to declines in infant mortality stem ultimately from increases in scientific knowledge.  Scientific advances have been a boon for mankind.  At the same time, however, science has been bursting more and more bubbles for the deeply religious fundamentalists who seek to desperately cling to stories authored numerous millennium ago by ignorant men motivated by fear and superstition or a need to feel superior over other surrounding cultures.  For fundamentalist Christians, perhaps the biggest blow has been the human genome project which has confirmed that the Adam and Eve of Genesis never existed as historical persons.  The result?  The entire Christian story line collapses.  Rather than have their simple minded beliefs undermined, these people are part of a growing tide of those engaged in a flat out denial of scientific truths.  Denial is the only thing that keeps their house of cards world view from collapsing.  And most of these people now make up the base of the Republican Party.  Here in Virginia, GOP gubernatorial candidate is an avid science denier. A piece in Huffington Post looks at the phenomenon and the efforts by some to counter it.  Here are excerpts:

New atheism refers to a set of ideas presented in a series of bestselling books that appeared between 2004 and 2007. Today it remains a strong but minority view among atheists. Basically, new atheists differ from the old atheists by being more willing to challenge religious beliefs that contradict science and reason, and engage in intellectual, moral, and political disputes with even moderate believers.

[N]ew atheists don't want to see creationism in the schools any more than the old atheists did. But they don't regard this as such an overarching problem that we should ignore the even greater damage that is done to society by the irrational, magical thinking associated with religion, which penetrates all areas of human life. Creationism is not the cause but the effect of such thinking.

Most working scientists and scientific organizations, notably the National Academy of Sciences, are accommodationist. They carefully avoid confronting religion for fear of losing public support for science. But let me tell you something. They're losing it anyway. Spurred on by the antiscience of the religious right, political support for science is lower now than at any time in memory.


Once America was the foremost nation in science. Today the most important discoveries are being made elsewhere. Few fresh science PhDs in the U.S. have much hope of getting a post-doctoral appointment and virtually none of making a career in the academic world.

In the meantime, our schools are producing a generation of science illiterates. The US is 29th among developed nations on a list that ranks the science literacy of 15-year olds.

Where does all this hostility to science come in?  I think the answer is clear. The hostility is not directed toward the practical applications of science, as in medicine and technology, but with the challenges that basic science brings to the religious views held by the majority of Americans. Unfortunately most Americans do not seem to realize that basic scientific research is the foundation of the welcome applications.

Let's take a look at some of the conflicts between science and religion that have an important impact on society. Of course, evolution is the most familiar; so let me cover that first. In a survey of 33 countries in Europe plus Japan, only Muslim Turkey had a lower belief in evolution than the United States.

Evangelicals and fundamentalists see evolution as a threat to their belief in the inerrancy of scripture, which indeed it is. No compromise is possible here. However, the Catholic Church and moderate Protestant churches say they accept evolution.  But that is simply not true.

The second big combat zone is climate change. There can be no factual disputing that the carbon dioxide level in the atmosphere is far above what is expected naturally and is caused by the burning of fossil fuels. And the simplest physics tells us that this will lead to global warming by the greenhouse effect.

Yet we still hear people saying that the whole global warming thing is a hoax, cooked up (no pun intended) by unscrupulous scientists in order to get more government funding. What have scientists actually done to deserve such mistrust? Nothing but present facts that conflict with the "deeply held belief" of many Christians that God would never allow such a thing.

In 2009, John Shimkus, Republican of Illinois, and a member of the Energy and Commerce Committee of the U.S. House of Representatives, argued that climate change is a myth because God told Noah he would never again destroy Earth by flood (Gen 8:21-22). He is seen on video as saying, "The earth will end only when God declares it's time to be over. Man will not destroy this earth. This earth will not be destroyed by a flood. . . . I do believe God's word is infallible, unchanging, perfect."

Now, it's not a surprise that the fossil-fuel barons and the politicians they support financially are behind all this global warming denial propaganda. . . . .  Perhaps it is not surprising that oil and coal companies would resort to dishonest tactics to protect its investments--the cutthroat business world being what it is. What is surprising is how many ordinary people fall for their lies.

Here again, few scientists and accommodationist atheists are willing to publicly acknowledge the role of religion. But the facts speak for themselves. A recent poll showed that only 31 percent of evangelicals believe there is any global warming at all, while 58 percent of those unaffiliated with any church not only believe Earth is warming but agree it is the result of human activity.

Faith would not be such a negative force in society if it were just about religion. However, the magical thinking that becomes deeply ingrained whenever blind faith rules over facts warps all areas of life. It produces a frame of mind in which concepts are formulated with deep passion but without the slightest attention paid to the evidence that bears on the concept.

From its very beginning in prehistory, religion has been a tool used by those in power to retain that power and keep the masses in line. This continues today as religious groups are manipulated to work against believers' own best interests in health and economic well being by casting doubt on well-established scientific findings. This would not be possible except for the diametrically opposed world-views of science and religion.

I have an urgent plea to scientists and all thinking people. . . . That goal is the replacement of foolish faith and its vanities with something more sublime--knowledge and understanding that is securely based on observable reality.


I agree with the author.  Religion - especially fundamentalist religion of all faiths - is an increasing blight on humanity.  It needs to be defeated and absolutely no deference given to religious based ignorance and denial.  House of cards faith systems need to be demolished along with the hate and bigotry that seem to be always tied to them.

Posted by Michael-in-Norfolk at Saturday, September 28, 2013