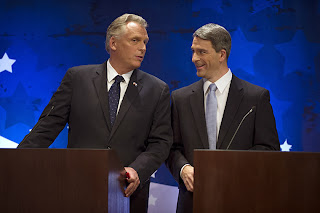 Besides the Hampton Roads area with its huge military presence and numerous defense contractor employers, the other part of Virginia that a government shutdown will devastate is Northern Virginia.  Both are regions that if the go heavily Democrat on November 5, 2013, will doom Ken Cuccinelli - and hopefully the other lunatics on the Virginia GOP ticket - to defeat.  If the federal government shuts down next week and pay checks and social security checks are not forthcoming, the GOP intransigence and effort to sabotage the American economy will be be all too fresh in voters' minds.   Two pieces in the Washington Post look at (i) the potential impact on Northern Virginia and (ii) the potential impact on Cuccinelli and the GOP ticket, all of whom are cut from the same extremists cloth as the House GOP members who want to wreak havoc and undo the 2012 election results.  Here are highlights from the first article:

A shutdown of the federal government next week could have a significant impact on the budgets of local governments across the Washington region, where officials are preparing to find alternative funds to pay for local services, officials say.

In Fairfax County, officials recently blamed a decision to deny pay raises for its workers on the federal spending cuts known as sequestration and the uncertainty brought on by the fight in Congress over whether to fund the Affordable Care Act.

Though not as directly affected as the District — where all local government activity depends on a federal appropriation — suburban communities nonetheless expect that a prolonged federal shutdown could mean more instability in a region that is recovering from the 2008 recession, officials said.

Fairfax is also home to about 4,100 federal contractors, who, in 2012, took in a combined $26.4 billion in federal contracts, according to the county’s economic development authority.

The [fairfax County] workers, who haven’t had a raise in five years, walked away furious.  “The minute the job market opens up, they’re leaving,” predicted Randy Creller, an IT specialist who serves on the county employee advisory council for about 12,000 employees.

What does this mean for the insane Christofascist/Tea Party fanatic Ken Cuccinelli?  Here are highlights from the second article:

Ken Cuccinelli II’s Republican friends on Capitol Hill could soon be frenemies if their threat of a federal shutdown continues.

As conservatives in the House and Senate face off with President Obama over his health-care law in a battle that threatens to shut down the federal government, Cuccinelli finds himself in a predicament in the Virginia governor’s race.

[T]he showdown also means that Cuccinelli could alienate more middle-of-the-road voters — the folks who might not like Obamacare but dislike government dysfunction even more. That’s especially true in the Northern Virginia suburbs.

“This is not tea party country, for the most part,” former congressman Tom Davis (R-Va.) said Thursday. “To the extent that the tea party is viewed as part of the problem up here, it’s not going to help the Republican candidate.”

For Cuccinelli, the timing of the showdown is particularly troublesome. McAuliffe already holds a solid lead in several polls, . . . . He’s also scheduled to host Sen. Ted Cruz (R-Tex.) on the campaign trail. Cruz, a ringleader of the showdown, . . . .

A shutdown would be felt particularly hard in Virginia, owing to its sizable population of government-dependent contractors and federal employees in Northern Virginia and its heavy military presence in Hampton Roads.

“The irony is he’s been trying to tie Terry McAuliffe to Washington politics,” Kidd Quentin Kidd, a professor of government at Christopher Newport University] [said. “But he would be the one tied to Washington.”

Cuccinelli personifies the problem with today's GOP.  He and his cohorts need to be defeated in a landslide loss that will send a message across the GOP nationwide.  Virginia readers need to get out and vote and get all of their friends and family members to do so as well.

Posted by Michael-in-Norfolk at Friday, September 27, 2013