Will a Government Shutdown Help Dems Hold Senate and Retake the House? 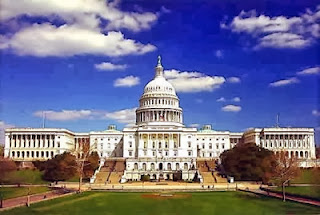 GOP extremism, of course is not limited to the Virginia GOP.  The same foul element of Christofascists and Tea Party loons that has swept the Virginia GOP like the bubonic plague swept through Europe during the Middle Ages has also overtaken the GOP nationally.  And now Democrats see the possible GOP forced government shut down as an opening to not only hold the U.S. Senate but to also regain the House of Representatives.  An article in the Washington Post looks at this analysis.  Here are highlights:


Democrats are working hard to exploit massive unrest in the Republican Party over the looming government shutdown, which many see as one of their best chances of holding the Senate or even gaining the House in next year’s midterm elections.

White House officials and other Democrats have been content to watch in recent days as Republicans have torn into each other over strategic disputes and are in no rush to launch negotiations on how to avoid a shutdown.

Instead, they have attacked Republicans as reckless, pressuring them to decide whether to keep the government open with no strings attached — as Democrats favor — or shut it down.

The key to the Democratic strategy is a belief that a showdown is likely to play out similarly to the government shutdowns of 1995 and 1996, which turned public opinion sharply against the Republican majority.

“It wouldn’t be the worst thing for Democrats if [Republicans] tried to shut the government down,” Hillary Rodham Clinton, the former secretary of state and a potential 2016 presidential candidate, said in New York on Tuesday.   “We’ve seen that movie before, and it didn’t work out so well for those so-called obstructionists,” she added.

The Cruz demonstration — which was opposed by many leading Senate Republicans and was set to end by Wednesday morning — plays into a Democratic strategy to try to ensure that the GOP is blamed for a shutdown if it occurs.

Congress must act by Monday night to avoid most agencies closing on Tuesday. The showdown is likely to serve as a launching point for a similarly contentious debate next month over raising the federal debt ceiling.

Looking ahead to the challenging midterm elections, Democrats see a potential political boon in the ongoing fights. Democratic candidates in some competitive races have begun to attack incumbent Republicans over the GOP effort to defund Obamacare, airing advertisements and targeting their offices with constituent calls.

“We’re going to make the case that 2014 is going to be a referendum between extremist Republicans and crisis and leaders with reasonable solutions,” said Rep. Steve Israel (D-N.Y.),

Polls show that Americans agree with the Democratic view that Obamacare should remain law. Voters also strongly oppose a debt default or a government shutdown as part of a ploy to strip funding for the health-insurance expansion.

Another challenge for Democrats is that many Republicans are less vulnerable than they were in the 1990s because gerrymandering has narrowed the number of competitive seats in the House, with only about two dozen GOP seats in play.

“I’m not going to say the Democrats are going to pick up 20 seats because the 2010 redistricting redrew the districts in such a remarkable way,” said Democratic strategist Paul Begala.