No Mid-October Paycheck for U. S. Troops if Government Shuts Down 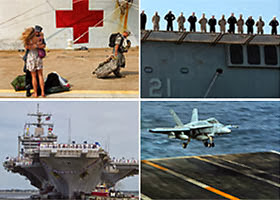 We hear constant bullshit from Republicans about "supporting our troops" and "supporting our brave service members in uniform."  As the saying goes, talk is cheap and GOP actions tell a far different story.  Not only do Republicans love to send our military out on fool's errands like the Iraq War and the disaster in Afghanistan - many were ready to add Syria to the list - but now in their drive to wound Barack Obama politically, they are ready to have members of the military go without pay.  With a son-in-law in the military, this crap REALLY pisses me off.  One can only hope that members of the military will wise up in 2014 and vote Democrat and send the bums packing.  Here are highlights from the Navy Times:

With one week to go before a potential partial government shutdown, a key Republican lawmaker is warning troops to be financially prepared for the possibility of not getting a mid-October paycheck.

Rep. C.W. “Bill” Young, R-Fla., chairman of the House defense appropriations subcommittee, warns that the troops’ morale and readiness will suffer even though the Defense Department does not shut down when its funding stops.

“All military personnel will continue to serve and accrue pay, but will not actually be paid until appropriations are available,” Young said. The mid-month payday would be the first in jeopardy.

Additionally, he said most travel and permanent change of station moves “would be delayed or canceled” and benefits for line-of-duty deaths also would be suspended.

Military hospitals and clinics will remain open but would scale back on operations, “impacting routine medical and dental procedures,” Young said. He did not specifically mention any impact on Tricare health insurance benefits, but in past government shutdowns, payments to medical providers were delayed but treatment was still available.

A bill to keep the government running is not unusual, but this measure, H.J. Res. 59, is different. It includes a section defunding the 2010 Affordable Care Act health care reform. The White House has warned that President Obama would veto the bill if this provision is included.

There is a second, equally controversial rider on the bill, the Full Faith and Credit Act, which details a priority list for paying bills if the government exceeds its $16.7 trillion debt limit. Creditors would be paid first, with military and federal civilian paychecks, disabled veterans’ checks, Medicare payments to doctors, school lunch programs and other government debts ranking lower.

The GOP House members are basically telling servicemembers "thank you for your service, now go f*ck yourselves."  Again, I truly hope members of the military make a point of voting and sending the GOP a very strong message.  They can start by voting a straight Democrat ticket in the 2013 Virginia elections.

Posted by Michael-in-Norfolk at Monday, September 23, 2013