McAuliffe Widens Lead Over Cuccinelli Ahead of Debate

UPDATED: In follow up to the first version of this post, a new Washington Post/Abt-SRBI poll puts Terry McAuliffe's lead over Ken Cuccinelli even larger that reported in the NBC4/NBC News/Marist poll.  Here are highlights from the Richmond Times Dispatch:


Democrat Terry McAuliffe has vaulted into the lead over Republican Attorney General Ken Cuccinelli in a Virginia governor’s race that has left many voters sour on both candidates, according to a new Washington Post/Abt-SRBI poll.

McAuliffe leads 47 percent to 39 percent among likely voters, with Libertarian Robert Sarvis’ 10 percent suggesting an unrest among voters not satisfied with either major-party contender.

The shift in the race has come almost exclusively from women voters, who prefer McAuliffe by a 24-point margin over Cuccinelli. The candidates were effectively tied among women in Washington Post poll in May.


McAuliffe’s strength among women is likely due in part to an intense campaign to portray Cuccinelli as a threat to women and the issues they might care about most deeply. A new McAuliffe ad, for instance, features a Norfolk OB-GYN speaking directly to the camera about how she is “offended” by Cuccinelli’s position on abortion rights.

The challenge for Cuccinelli is stark: Nearly half of all voters view him unfavorably, and they trust his opponent as much as or more than him on every major issue, according to the poll.

While the poll trends are encouraging, Cuccinelli not only needs to be defeated, but defeated in a landslide.  All efforts to motivate and turn out likely Democrat voters need to remain in high gear. 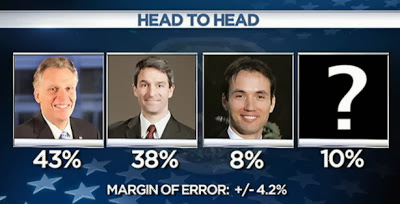 Like most Virginians, I am exhausted from this year's mud slinging gubernatorial race pitting the GOP's closeted and insane Ken Cuccinelli against Democrat Terry McAuliffe.  As my latest column in the September issue of VEER Magazine stated, McAuliffe may not be my dream candidate, but compared to sodomy law and personhood bill supporting Ken Cuccinelli, McAuliffe is the better choice for numerous reasons.  Apparently, other Virginians are beginning to draw a similar conclusion.  A new NBC4/NBC News/Marist poll shows McAuliffe with a five point lead over Cuccinelli.  Ten percent of voters polled are "undecided," so it is critical that efforts not let up in turning out voters to vote for a straight Democrat ticket on November 5, 2013.  Here are highlights from NBC Channel 4 in Washington on the poll findings:

The poll of 546 likely voters and 1,069 registered voters, conducted from Sept. 17 to 19, comes two days before a debate between McAuliffe and Cuccinelli sponsored by NBC4 Washington and the Fairfax County Chamber of Commerce and moderated by NBC News Chief White House Correspondent and Political Director Chuck Todd.


After a summer of mudslinging and negative campaign ads, neither candidate is well liked, but Cuccinelli has taken a bigger hit. Just 34 percent of registered voters view Cuccinelli favorably, while 47 percent say they have an unfavorable impression of him. Back in May, it was the reverse – 42 favorable, 27 percent unfavorable.

McAuliffe, on the other hand, is on the positive side – 41 favorable, 34 percent negative – though those unfavorable numbers are up 10 points as more people have gotten to know the former Democratic National Committee chairman under Bill Clinton and party fundraiser.

Sarvis may be something of an outlet for disaffected Republican voters who are calling themselves independents. With the national GOP brand suffering, there has been a trend nationally and in Virginia that more Republicans are identifying as independents. Mitt Romney, the Republican nominee for president in 2012, after all, won independents, but lost the election.

Between now and election day, I hope more voters learn about Cuccinelli's improper assistance to energy companies against Virginia landowners, his support for a personhood amendment that would criminalize all abortions and many forms of contraception, his desire to change divorce laws to favor fathers against women, and his extremism on other social issues, including employment protections for gay employees.

Posted by Michael-in-Norfolk at Tuesday, September 24, 2013