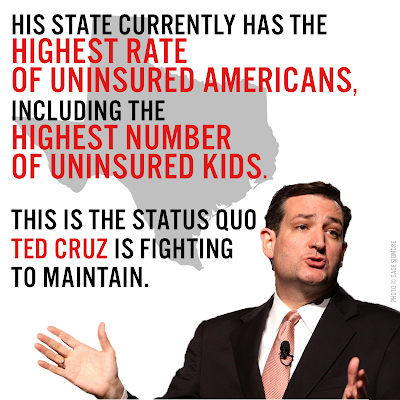 There are a lot of despicable politicians at both the state and national level.  But few at the national level disgust me more than Texas GOP Senator Ted Cruz and not just because he is all too reminiscent of Joseph McCarthy who lead the anti-communist witch hunts of the 1950's.  Rather, it is Cruz's hypocrisy and, in my view, his outright dishonesty.  Naturally, he claims to honor Christian tenants even as his votes are diametrically opposed to the principles of the Gospel message.  Ezra Klein takes Cruz's dishonesty apart in a column in the Washington Post:

"Americans feel like they don't have a voice," Cruz said. "I hope to play a small part in providing that voice for them."

[T]his is a bizarre argument for Cruz to be making. After all, Cruz himself is firmly on the wrong side of public opinion: 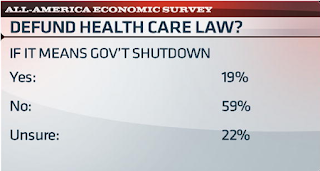 Which is why it's so odd Cruz has chosen this argument. He could just be up there arguing against Obamacare. Instead he's arguing that we need to #MakeDCListen. He's making a broad, quasi-philosophical argument that senators should more fully reflect public opinion. But even he doesn't believe it. Cruz's filibuster is self-refuting.

Cruz epitomizes what's wrong with today's GOP.  Pompous, arrogant, disdainful of average Americans and their hopes and needs, and utterly opposed to the Christian values he claims to venerate.

Posted by Michael-in-Norfolk at Tuesday, September 24, 2013