The GOP Is Threatening Murder-Suicide 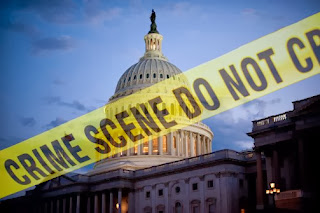 Ideological extremism is always dangerous for mainstream society.  Especially when the ideological extremism deems it perfectly acceptable to harm others in the quest to achieve toxic goals.  In Kenya we have seen is murder and mayhem.  In Washington, D.C., we see Republicans poised to wreak economic and financial havoc on millions of citizens in an ideological battle that panders to Christofascist and Tea Party extremists that wants a government shut down and/or debt default.   Ironically, I saw an ad this morning against Obamacare in which a paid actress claims that she wants top quality medicine available for all and doesn't want her family members to be mere numbers to a government bureaucracy.  Her statements demonstrate the height of ignorance that motivates the GOP.  ALL of us - unless we are very wealthy are already mere numbers - to insurance companies that don't give a damn about us as people.  As for the statement of wanting quality care for all, the elimination of Obamacare would throw millions of Americans back into an uninsured status.  One can only hope the majority of Americans see the GOP extremist for the danger that they are.  A piece in The Daily Beast looks at the impending show down:

The Republican Party is destroying America.

Harsh words, yes. But inescapably true. It’s a bit of a murder-suicide. House Republicans’ willingness to lay waste to the country to satisfy their fringiest faction will ultimately guarantee the GOP irrelevancy as a national party, unless they change their ways. In the meantime, they seem determined to take us all down with them.


There isn’t even a feint toward decency. In what has become a recurring nightmare, House Republicans are using budget negotiations to play chicken with the stability of the American economy. This time, they want President Obama to agree to defund his signature achievement, the Affordable Care Act. If he refuses to strangle his own baby in the crib, Republicans are happy to retaliate. They’ll shut down the government. These are not people with whom one can work.

Last year, Norm Ornstein of the American Enterprise Institute and Thomas Mann of Brookings wrote a book about this dysfunction known as the new Republican Party. It’s Even Worse Than It Looks: How the American Constitutional System Collided With the New Politics of Extremism makes a compelling case that the problems in Washington are not the result of “both sides”—the oft-preferred media frame—but of a GOP that has become all but unrecognizable to most Americans.


Just how damaging have the congressional Republicans been to the country? “If you look at what could have happened in a reasonable political system, with give and take … we would have been on a more robust path to growth,” said Ornstein. “We’ve gone from one credit agency downgrading us to a far greater likelihood that we will default. If sequester continues … it is a cancer eating away at national parks, food safety, basic research … it’s a terrible situation. No matter how much [Republicans] talk about how it was Obama’s idea … the whole idea was to create such awful consequences that no sane person would accept it. But these aren’t sane people.”

GOP stalwarts have framed criticisms of the party as attempts to make it more liberal. That is self-serving denial. The legitimate complaint about the new Republican Party, one you will hear frequently even from Republicans speaking privately, is that it is intransigent and beholden to its most radical elements. Having principles is fine. Imposing them on everyone else through destructive maneuvering that keeps the country constantly on edge is not.

“We want a Republican Party that returns to problem-solving mode,” he said. “We are suggesting that what works in American politics and our system is when parties focus on how you can solve the big problems and how you can have some give and take. There is one party that has lost its way and is being dominated by people who by historical standards are on the fringe.”


Both men agree that the GOP will likely get worse before it gets better. How is that possible, you ask? Looks like we are about to find out.

Posted by Michael-in-Norfolk at Sunday, September 22, 2013