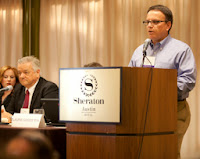 This blog is none too kind to the Roman Catholic Church and the Church hierarchy when it comes to the issue of sexual abuse of children and minors by priests and other clergy.  The hierarchy is little more than a foul cesspool which has engaged in a worldwide criminal conspiracy to cover up abuse and to protect sexual predators.  I continue to believe that much of the abuse stems from priestly celibacy and the stunted and warped psycho-sexual development of priests that arises from the seminary system.  Add to that the Church's obsession with sex and the fact that the Church provides good cover for those with sexual/developmental problems and it is a recipe for disaster.  But while the Catholic Church has the most centralized and extensive conspiracy to cover up sexual crimes by clergy, the problem extends far beyond the Catholic Church, probably because far too many who are struggling with sexual identities and addictions see joining the clergy as a means to control their sick inclinations.  Naturally, it doesn't work as planned and the fox is in the hen house with access and a system of deference that makes abuse all too easy and subject to cover up. Billy Graham's grandson (pictured above) has had the courage to call out other Christian denominations.  Here are details via Religion News Service:

While comparing evangelicals to Catholics on abuse response, ”I think we are worse,” he said at the Religion Newswriters Association conference, saying too many evangelicals had “sacrificed the souls” of young victims.

“Protestants can be very arrogant when pointing to Catholics,”  said Tchividjian, a grandson of evangelist Billy Graham and executive director of Godly Response to Abuse in the Christian Environment (GRACE), which has investigated sex abuse allegations.

Earlier this summer, GRACE spearheaded an online petition decrying the “silence” and “inattention” of evangelical leaders to sexual abuse in their churches.

Mission agencies, “where abuse is most prevalent,” often don’t report abuse because they fear being barred from working in foreign countries, he said. Abusers will get sent home and might join another agency. Of known data from abuse cases, 25 percent are repeat cases, he said.

Evangelicals often frown upon transparency and accountability, he said, as many Protestants rely on Scripture more than religious leaders, compared to Catholics.

Abusers discourage whistle-blowing by condemning gossip to try to keep people from reporting abuse, he said. Victims are also told to protect the reputation of Jesus.

Too many Protestant institutions have sacrificed souls in order to protect their institutions, he said. ”We’ve got the Gospels backwards,” he said.

Candidly, in my view, the more a denomination obsesses over all things sexual, the higher the likelihood that sexual abuse is rampant.  Not only is the forbidden fruit of sex made more attractive, but the more warped members of the clergy are likely to be themselves.  Unfortunately, Tchividjian stops short of making this connection.
Posted by Michael-in-Norfolk at Saturday, September 28, 2013