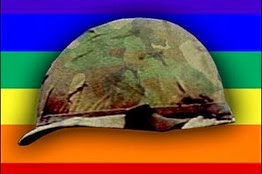 Andrew Sullivan and others had a case of the vapors recently based on Pope Francis' statements in a recent interview criticizing the Roman Catholic Church's "obsession with gays, abortion, and contraception."  Such individuals hoped - or wanted to believe - that such statements might indicate a moderation of the Church's extremism on such issues.  Their hopes it seems were a mere self-indulgent fantasy.  As the Washington Post reports, rather than moderating the Church has ordered Catholic military chaplains to more or less adopt the agenda of the Southern Baptist Convention and boycott anything that might remotely treat same sex military couples decently and humanely.  Here are excepts from the Post story:

Catholic military chaplains cannot be forced to witness or bless a same-sex marriage, nor are they allowed to take part in any marriage counseling retreats that are open to gay couples under new rules issued by the Archdiocese for the Military Services.

The rules, sent to chaplains on Sept. 18 by Archbishop Timothy P. Broglio, head of the AMS, also bar chaplains from taking part in a funeral for a Catholic if that participation “would give the impression that the church approves of same sex ‘marital’ relationships.”

Broglio cited an interpretation from the National Catholic Bioethics Center explaining that Catholic commanders can morally facilitate benefits for gay couples in their command if there was no other way to avoid it without jeopardizing their career.

“This is also contingent on the commander making known his/her objection to being required to . participate, as well as on attempting through legal channels to continue to accomplish changes in policy consistent with the historic understanding of marriage and family as based on natural moral law,” said the statement from the bioethics center.

In his statement, Broglio said the new federal policy on gay marriage and gay rights for military personnel “makes it necessary to reiterate with clarity the teaching of the Catholic Church regarding homosexuality.”

The new rules also reiterate that “anyone who is known to be in a sinful relationship is excluded from ministries” such as serving as a lector, catechist, altar server or from giving out Communion.

My advice to gay Catholics continues to be to leave Catholicism - the Episcopal and Evangelical Lutheran Church in America parishes offer a good alternative - and to encourage all of their friends and family members to do so as well.  Andrew Sullivan and others are entitled to their opinions, but they need to pull their heads out of the sand.

Chaplains in the military are obsolete and need to be abolished. Please sign this petition to President Obama and circulate it: