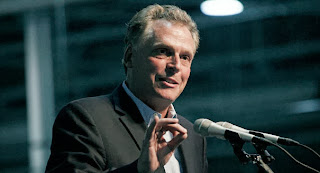 As the last post underscores, Ken Cuccinelli and his Christofacsist climate denying running mates are a threat to Hampton Roads' economy and long term future.  Today, the Fairfax County Chamber of Commerce endorsed Democrats Terry McAuliffe, Ralph Northam and Mark Herring.  For non-Virginians, Fairfax County has the largest economy of any city or county in the Commonwealth of Virginia.  Combined with the neighboring Arlington and Alexandria, it has nearly one third of Virginia's population and is a main economic powerhouse for the Virginia.  That the Fairfax Chamber endorsed the entire Democrat ticket speaks volumes about how the GOP slate will be bad for business and seek to drag Virginia backward in time to when racism and homophobia were state sanctioned policy and women were subordinate citizens.  Here are highlights from the Richmond Times Dispatch:

The political arm of the Fairfax County Chamber of Commerce has endorsed the Democratic ticket for governor, lieutenant governor and attorney general.

The coveted endorsement of NOVABizPAC -- which backed Republican Bob McDonnell in 2009, is a key pickup for Democrat Terry McAuliffe.

Today's announcement follows a contentious, chamber-sponsored televised debate between McAuliffe and Cuccinelli Wednesday that saw each portray the other as unfit for the Executive Mansion.

A news release issued by NOVABizPAC said McAuliffe won the endorsement "based on his pro-business policy positions and proposals."

"Mr. McAuliffe was a major supporter of Governor McDonnell’s landmark transportation funding legislation and a consistent supporter of rail to Dulles," airport, Jim Corcoran, Fairfax chamber president and a trustee of NOVABizPAC, said in the release.

In other endorsements, NOVABizPAC favored Northam based on his support for the Fairfax Chamber's legislative priorities and for his "record and experience in the Virginia Senate."

Virginia does not need to return to the 1950's - or preferably the 1850's in the eyes of the many white supremacists now in the Virginia GOP base - and the Fairfax Chamber recognized this reality.