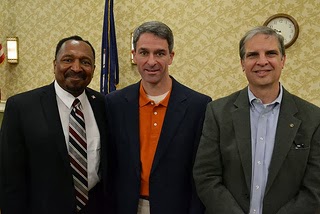 Polls are seemingly trending in the right direction and one of my personal goals is to see the title of this post become a reality.  Horrific defeat may be the only thing that can save the Republican Party of Virginia from the foul and toxic elements of Family Foundation Christofascists and Tea Party Neanderthals who currently hold sway over the party.  They certainly are the group that hijacked the nominating process this year and handed Virginia the most extreme - and I would argue, insane - statewide ticket in history. These folks need to be driven into the political wilderness forever.  A column in Blue Virginia looks at the possible coming Virginia GOP defeat.  Here are excerpts:


The Virginia GOP is one Tea'ed-up Party, but they ain't seen nothing yet: that will come if current trends hold, and the Virginia GOP goes down to their worst defeat ever in the two-party era.

Since the spring, I have been predicting that after Inauguration Day next year, there will NO Republicans in statewide office for the first time since Holton's swearing-in [in 1969].

Fast forward to late September 2013, when all the polls indicate the possibility of an historic Democratic sweep in a few weeks, the first 0-5 for the GOP since the 1966 election of two Democratic Senators to add to the party's three statewide office holders.

First of all, Cuccinelli is going to get the lowest cross-over Democratic vote EVER for a Republican candidate for Governor. I mean EVER. The Democratic anti-Cuccinelli fervor is simply amazing. This is why I believe the 2009 turnout, featuring 4 percentage points more Republicans than Democrats, can't be duplicated by Cuccinelli this year. Yes, he has the more "loyal" followers. But that's because he has the smallest base of voters!

Meaning: If you assume Cuccinelli has the lowest cross-over Dem vote ever, and you further postulate that anti-Cuccinelli fervor among Dems is high, then Cuccinelli has to do three things in October: 1) motivate lukewarm, normally GOP voters; 2) gin-up his own base to 2009 levels; and 3) win independents at 55% or more. Why? Because all the polls show that Cuccinelli has a certain "bleed" among Republicans. Even if he stops this voter bleed-out, he needs to win indies to triumph.

Right now, as I have written locally and nationally, Cuccinelli doesn't have either the issue, the strategy, or the brain trust to make that happen. . . . . Terry is more likely to play smart politics while Cuccinelli is the one facing two new threats.

First, E. W. Jackson, the LG nominee for the GOP, is simply not qualified for even a job that doesn't require any qualifications. His latest attack on those who have different religious views than himself is contrary to the very teachings of his religion. Either Cuccinelli and Obenshain ultimately repudiate him - the smart move - or they stay silent, the dumb move. But either way, Jackson will cost them more votes as October plays out.

Second, you have the candidacy of Libertarian guv guy Robert Sarvis.

NO, IT ISN'T OVER. But every week, there is a new "political fire" for Cuccinelli to put out. Right now, he is in danger of running the worst campaign for Governor since Wyatt Durrette in 1985. That was the last watershed year up and down the ballot.

Not to be a broken record, but turn out is critical.  Gays, women, minorities and those who believe in religious freedom for all - not to mention those who believe in science - need to turn out to drive a wooden stake through the heart of The Family Foundation/Tea Party contagion that has overtaken the Virginia GOP like a plague.