Once Thinking Republicans Are Turning Into Pod People 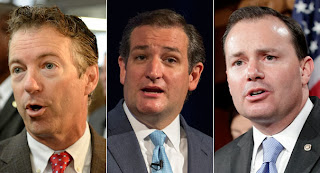 As a former Republican it continues to distress me to see a once largely responsible, intelligence revering party turned into a nest of spittle flecked Christofascists and Tea Party Neanderthals.  Equally upsetting is seeing once reasonable and thinking Republicans - i.e., those who haven't already fled the GOP - act as if they have had lobotomies and been turned into zombies who recite the mantra dictated by Fox News and Rush Limbaugh regardless of what objective reality and hard facts indicate to the contrary.  I have one former colleague in particular that I can't believe has been turned into a mindless sound bite reciting robot.  WTF happened?  I attribute some of it to unspoken racism brought to the fore by Barack Obama's election to the White House, but that doesn't fully explain the problem.  A piece in Politico looks at the frightening phenomenon. Here are excerpts:


In the classic 1956 sci-fi film Invasion of the Body Snatchers, an alien race comes to Earth and begins turning humans into “pod people.” Their bodies are left intact, but their minds are regrown, rending them humanoid robots under the aliens’ command. Unrecognizable to neighbors, the pod people take over until nothing is left of human society.

At the time of its release, the film was seen as a metaphor either for communist takeover (according to conservatives) or an ironic criticism of the irrational fears of communist takeover (according to liberals). Today, we think the body snatchers conceit perfectly fits another trend: the takeover of the responsible conservative movement — or least what is left of it. A small faction-within-a-faction — government-decrying, religious-fanatic, anti-science — have turned thinking Republicans into pod people.


There is growing concern that while Republicans may dominate off-year congressional elections, their ability to win a presidential election is diminishing. The crisis on the right revolves around two issues: demographic trends working against the GOP in the general election, and insanity working against the GOP in the nomination process. Extremist outliers now dominate both the public face and internal organization of the Republican Party.

The evidence of Republicans at war with themselves and with reality mounts daily. Even those recognized as seemingly “rational” Republican and conservative voices, both in elected office and the punditocracy, are pandering to religiously radical, inward-focused factions. The result is a GOP fixated on the roughly 10 million people who listen to conservative radio and television pundits, instead of projecting messages of inclusion and hope to 230 million registered voters.
It was not always this way.

Into this vacuum stepped faith-based Republicans, also known as “TheoCons.” The TheoCons, including national politicians and the religious coalitions backing them, entered GOP circles during the 1978 off-year elections. Many were evangelicals who supported Jimmy Carter in the 1976 presidential election, hoping that Carter’s devout Christianity would usher in policies friendly to their Christian worldview. Their disappointment led them into the Republican Party.

The TheoCons used their time in waiting to methodically take control of the Republican Party at the county and state levels. Their fervor for biblical policies and evangelical beliefs easily overwhelmed the waning legions of GOP Cold Warriors and independent libertarians.


Fast forward to 2012, and the Republican Party of the 21st century looks more like 16th-century Europe, when doctrinaire Catholicism and fervent Protestantism were literally fighting over hearts and souls amid the Reformation. Science and medicine were locked in the realm of superstition. Absolute dictators ruled everywhere. It would take another 100 years before the beginnings of rational thought, scientific inquiry, and liberal democracy took root.


That is the fundamental problem of today’s Republican Party: Its philosophical “outliers” have become its activist core. This has infected Republicans at all levels, from the state house, to the Congress, governors, and the presidential contenders. Virtually any Republican candidate who wants to run and hold office, must at least give lip service to an activist government based on biblical imperatives. We know from personal experience, over recent years, that in some circles, in order to obtain the GOP nomination, raise funds, and attract campaign volunteers, Republicans must not only embrace biblical creationism, but also go on the record supporting the concept of a “young Earth” — the creationist belief that our planet was formed in seven days, starting on March 18, 3952 B.C. (though dates vary). They must also agree to expand the size of government to enforce biblically based policies, like the absurd anti-sodomy debate going on in Virginia.

The TheoCon body snatchers have turned a Party of the Enlightenment and liberty into the pod people of science fiction movies. Many meetings among Republican fundraisers, caucuses, and party leaders have enforcers — local activists — ready to alert their fellow pods to heresy. Shrinking numbers and electoral defeat only strengthens the pod people’s hold on the party. More and more Republicans fall asleep under their spell, only to awake and join them.

The invasion of the GOP body snatchers is not just hurting the legacy of the Republican Party and conservative movement. It is hurting America’s ability to conduct a civil and sensible national debate. When the process of positive political dialogue is invaded by pod people, it ceases to be possible. Everyone has an interest in fighting the invasion.

Posted by Michael-in-Norfolk at Sunday, September 22, 2013

I wonder who will be snapped up next, whose reasonable thoughts, will be wiped from their minds to be replaced by hateful nonsense?