When Will the GOP Kick Out Ted Cruz and Similar Crazies? 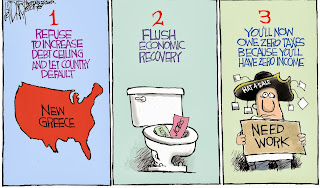 I find it somewhat scary when conservative/GOP columnist Jennifer Rubin starts to sound like me.  But she is onto something when it comes to the need for the Republican Party at both the national level and certainly here in Virginia to kick the crazy elements – principally Christofascists and racist,  Until this happens, I believe that the GOP is in a long term death spiral.  The irrationality and refusal to accept objective reality of these folks makes it impossible to reason with them or to appeal to a majority of voters when GOP nomination contests have become a contest as to who can be the most certifiably insane in order to win the nomination.  Here are excerpts from Rubin’s column in the Washington Post:
ignorance embracing Tea Party lunatics – from the Party.

When the John Birchers had to be kicked out of the Republican Party, William F. Buckley Jr. effectively excommunicated them from the GOP. When the “smoking gun” Watergate tape came out, it was the late Sen. Barry Goldwater (R-Ariz.) who urged Richard Nixon to resign. And when Pat Buchannan’s views could no longer be called anything but anti-Semitic, it was Buckley who called him out.

If the GOP has one big problem now it is that there is no Goldwater, no Buckley to tell Sen. Ted Cruz (R-Tex.) and his ilk that enough is enough. The Republicans interested in governance are now participants in the political scrum. The biggest of the conservative magazines, whose editors should know better, are too timid. They poke and prod here and there, but really stand up to the destructive right wing? No. They fear a full throttle debunking would put at risk their place in the conservative cosmos. They mistakenly believe that their role is to rebuke only liberals.

The Wall Street Journal editorial page or a conservative eminence like George Will or Charles Krauthammer can call the tune of charlatans, but the Cruz crowd dismisses even them as pawns in the Great GOP Sell-out.

There is no single governor, no party senior statesman to say, “It is intolerable to impugn the motives of those who fought long and hard against the liberal welfare state. Mr. Cruz, you are not helping; you are hurting. Please sit down and learn for a few years.”

The politics of the right becomes akin to university politics — bitter and small-minded with small spoils at stake. And the architecture that encompasses Cruz, talk radio, Heritage Action and the rest can sustain itself –in fact does better — when the party loses. It is not obvious how or even if the GOP gets back on track.

The saying goes that we get the government we deserve. The same is true of political parties. Republicans collectively have to decide what they want to be and what role they want to play in the next few decades. They can be participants in a majority party — eager and capable of governing, optimistic and inclusive – or they can be the party run by Heritage Action/Ted Cruz. But they can’t be both.

I keep hoping for the total meltdown. It's coming. I can't wait to giggle.