One Town's War on Gay Teens 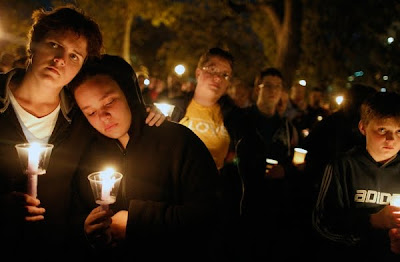 Few things upset and sicken me more than seeing the continued death toll of LGBT teens - or those perceived to be LGBT - from suicide. It's a tragedy that might easily be avoided but for the ongoing anti-gay jihad of Christianists (and in some parts of the world, Muslims) who seem to take delight in making the lives of LGBT people everywhere a living Hell. Sadly, it's almost as if the want to see LGBT individuals end their lives. And one area of the country has been taking this war against gay teens to horrific levels. Where is it? Anoka, Minnesota - not surprisingly, in Michele Bachmann's congressional district - where Christianists have waged a relentless war against any policy and procedures that might protect LGBT school students from anti-gay bullying and/or punish bullies. It's sick and perverse, but then so is fundamentalist Christianity which is best defined by the hate that flows out against a host of people: gays, Muslims, non-Christians in general, liberals, blacks, and let's not forget immigrants. Rolling Stone has a lengthy article (it deserves a full read) that looks at this toxic environment and the efforts of the younger generation to fight back against the hate and bigotry of the "godly Christian" set. Here are brief highlights:

Like many 13-year-olds, Brittany knew seventh grade was a living hell. But what she didn't know was that she was caught in the crossfire of a culture war being waged by local evangelicals inspired by their high-profile congressional representative Michele Bachmann, who graduated from Anoka High School and, until recently, was a member of one of the most conservative churches in the area. When Christian activists who considered gays an abomination forced a measure through the school board forbidding the discussion of homosexuality in the district's public schools, kids like Brittany were unknowingly thrust into the heart of a clash that was about to become intertwined with tragedy.

When she told administrators about the abuse, they were strangely unresponsive, even though bullying was a subject often discussed in school-board meetings. The district maintained a comprehensive five-page anti-bullying policy, and held diversity trainings on racial and gender sensitivity. Yet when it came to Brittany's harassment, school officials usually told her to ignore it, always glossing over the sexually charged insults. Like the time Brittany had complained about being called a "fat dyke": The school's principal, looking pained, had suggested Brittany prepare herself for the next round of teasing with snappy comebacks – "I can lose the weight, but you're stuck with your ugly face" – never acknowledging she had been called a "dyke." As though that part was OK.

Sam was even helping to start a Gay Straight Alliance club, as a safe haven for misfits like them, although the club's progress was stalled by the school district that, among other things, was queasy about the club's flagrant use of the word "gay." Religious conservatives have called GSAs "sex clubs," and sure enough, the local religious right loudly objected to them. "This is an assault on moral standards," read one recent letter to the community paper.

Brittany admired Sam's courage, and tried to mimic her insouciance and stoicism. So Brittany was bewildered when one day in November 2009, on the school bus home, a sixth-grade boy slid in next to her and asked quaveringly, "Did you hear Sam said she's going to kill herself?"


No one saw the rest of them coming, either. Sam's death lit the fuse of a suicide epidemic that would take the lives of nine local students in under two years, a rate so high that child psychologist Dan Reidenberg, executive director of the Minnesota-based Suicide Awareness Voices of Education, declared the Anoka-Hennepin school district the site of a "suicide cluster,"

There was another common thread: Four of the nine dead were either gay or perceived as such by other kids, and were reportedly bullied. The tragedies come at a national moment when bullying is on everyone's lips, and a devastating number of gay teens across the country are in the news for killing themselves. Suicide rates among gay and lesbian kids are frighteningly high, with attempt rates four times that of their straight counterparts; . . . and that internalized homophobia contributes to suicide risk.

Against this supercharged backdrop, the Anoka-Hennepin school district finds itself in the spotlight not only for the sheer number of suicides but because it is accused of having contributed to the death toll by cultivating an extreme anti-gay climate. "LGBTQ students don't feel safe at school," says Anoka Middle School for the Arts teacher Jefferson Fietek, using the acronym for Lesbian, Gay, Bisexual, Transgender and Questioning. "They're made to feel ashamed of who they are. They're bullied. And there's no one to stand up for them, because teachers are afraid of being fired."

"We are not a homophobic district, and to be vilified for this is very frustrating," says superintendent Dennis Carlson, who blames right-wingers and gay activists for choosing the area as a battleground, describing the district as the victim in this fracas. "People are using kids as pawns in this political debate," he says. "I find that abhorrent."

Ironically, that's exactly the charge that students, teachers and grieving parents are hurling at the school district. "Samantha got caught up in a political battle that I didn't know about," says Sam Johnson's mother, Michele. "And you know whose fault it is? The people who make their living off of saying they're going to take care of our kids."

For years, the area has also bred a deep strain of religious conservatism. At churches like First Baptist Church of Anoka, parishioners believe that homosexuality is a form of mental illness caused by family dysfunction, childhood trauma and exposure to pornography – a perversion curable through intensive therapy. It's a point of view shared by their congresswoman Michele Bachmann . . . . Though Bachmann doesn't live within Anoka-Hennepin's boundaries anymore, she has a dowdier doppelgänger there in the form of anti-gay crusader Barb Anderson. A bespectacled grandmother with lemony-blond hair she curls in severely toward her face, Anderson is a former district Spanish teacher and a longtime researcher for the MFC who's been fighting gay influence in local schools for two decades, ever since she discovered that her nephew's health class was teaching homosexuality as normal.

When the Anoka-Hennepin district's sex-ed curriculum came up for re-evaluation in 1994, Anderson and four like-minded parents managed to get on the review committee. They argued that any form of gay tolerance in school is actually an insidious means of promoting homosexuality – that openly discussing the matter would encourage kids to try it, turning straight kids gay.

The policy became unofficially known as "No Homo Promo" and passed unannounced to parents and unpublished in the policy handbooks; most teachers were told about it by their principals. Teachers say it had a chilling effect and they became concerned about mentioning gays in any context.

Justin [Aberg] was more than ready to turn the corner on the horrors of middle school – especially on his just-finished eighth-grade year, when Justin had come out as gay to a few friends, yet word had instantly spread, making him a pariah. In the hall one day, a popular jock had grabbed Justin by the balls and squeezed, sneering, "You like that, don't you?" That assault had so humiliated and frightened Justin that he'd burst out crying, but he never reported any of his harassment. The last thing he wanted to do was draw more attention to his sexuality.

Just 11 days after Sam's death, on November 22nd, 2009, came yet another suicide: a Blaine High School student, 15-year-old Aaron Jurek – the district's third suicide in just three months. After Christmas break, an Andover High School senior, Nick Lockwood, became the district's fourth casualty: a boy who had never publicly identified as gay, but had nonetheless been teased as such. Suicide number five followed, that of recent Blaine High School grad Kevin Buchman, who had no apparent LGBT connection. Before the end of the school year there would be a sixth suicide, 15-year-old July Barrick of Champlin Park High School, who was also bullied for being perceived as gay, and who'd complained to her mother that classmates had started an "I Hate July Barrick" Facebook page.

The silence of adults was deafening. At Blaine High School, says alum Justin Anderson, "I would hear people calling people 'fags' all the time without it being addressed. Teachers just didn't respond." In Andover High School, when 10th-grader Sam Pinilla was pushed to the ground by three kids calling him a "faggot," he saw a teacher nearby who did nothing to stop the assault. At Anoka High School, a 10th-grade girl became so upset at being mocked as a "lesbo" and a "sinner" – in earshot of teachers – that she complained to an associate principal, who counseled her to "lay low"; the girl would later attempt suicide. At Anoka Middle School for the Arts, after Kyle Rooker was urinated upon from above in a boys' bathroom stall, an associate principal told him, "It was probably water." Jackson Middle School seventh-grader Dylon Frei was passed notes saying, "Get out of this town, fag"; when a teacher intercepted one such note, she simply threw it away.

The story goes on for several more pages, but you get the drift. It's sickening and disgusting that the Christofascists have largely had free rein to silence those who might protect LGBT students. The pattern is similar to what Christian Taylor's mother said was the norm in the nearby York County School division - and the outcome was equally tragic: Christian took his own life at age 16. Once again, it's a case of the pervasive evil done in the name of religion. Fortunately, a lawsuit has been filed against the school district and the Civil Rights of the Department of Education is currently conducting an investigation. Time will tell if anything meaningful will come of it. The clearest solution is to drive religion out of education policy. Every student has the right to a safe school environment and the right to pursue life, liberty and happiness without constant attacks encouraged by the hate merchants of the professional Christian set and their fellow Christianists. The special privileges and deference given to conservative Christianity need to end immediately.

Posted by Michael-in-Norfolk at Friday, February 03, 2012