How Long Will the GOP Demolition Derby Go On? 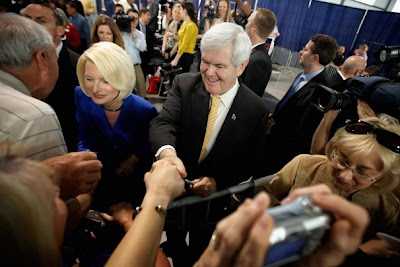 On Sunday, thrice married, serial adulterer Newt Gingrich said that he would continue in the GOP presidential contest all the way into August even if he loses the Florida primary. Some see this as bluster but others believe that Gingrich is such an ego maniac that he might well live up to the threat. His goal would be to force a brokered convention which itself might allow for yet more circus like insanity. Should Gingrich stay on, the biggest winner will likely be Barack Obama as the GOP contestants continue to bludgeon one another. A piece in New York Magazine looks at Gingrich and why it's not out of the question that he will try to stay in the race. Here are some highlights:

On the Sunday shows, Gingrich repeatedly called Romney a liar and decried his rival's "carpet-bombing" of him with negative ads. But outside the church, Gingrich went further, calling Romney a "pro-abortion, pro-gun-control, pro-tax-increase moderate from Massachusetts" who has been using "money from Wall Street" to spread his pernicious lies. Gingrich called this "as big an outrage I've had in my career." He predicted that Romney would be unable to secure the requisite number of delegates to claim his party's nomination.

Three things sprang to Impolitic's mind after basking in the warm Florida sun and absorbing this praise-the-Lord-and-pass-the-truncheon performance. The first and most obvious is that Gingrich has fully absorbed the fact that he is going to lose, and possibly very badly, in Tuesday's primary here. Given the trio of polls released this morning that show Romney leading by between eight and sixteen points, of course, Gingrich would have to be blind or batshit crazy (i.e., even crazier than his critics believe him to be) not to recognize what is almost certainly about to befall him.

The second thing evident from Gingrich's parking-lot press avail in Lutz was that someone has finally impressed on him that, if he is going to have a hope in hell of competing effectively against Romney in the final two days in Florida and beyond, he must, you know, drive a message. All week long and most glaringly at the pair of debates in Tampa and Jacksonville, Gingrich failed utterly to pound the contrast that served him so well in South Carolina: that Republican voters have a clear choice before them — between, as he would put it, a timid Massachusetts moderate and a bold Reagan conservative.

And what of Gingrich's pledge to carry on his crusade all the way to Tampa? That's takeaway number three. Pledges to continue the fight unabated in the face of harsh and/or humiliating outcomes are staples of presidential campaigns. . . . . But in Gingrich's case, he might be serious, so much has he come to despise Romney and the Republican Establishment that has brought down on him a twenty-ton shithammer in Florida, and so convinced is he of his own Churchillian greatness and world-historical destiny. The same antic, manic, lunatic bloody-mindedness that has made him such a rotten candidate in the Sunshine State may be enough to keep him the race a good long time.

Waging a protracted battle would likely be an act of futility for Gingrich, but it could turn out to be something much worse for Romney. That is why it's so important for the latter not just to win on Tuesday but to win big — very big. And that, in turn, is why the matter of margins will be the topic of tomorrow's column.

Annoying as a fair-weather-friend president is, one not eager to invade Iraq or to add Christianists to the federal judiciary is the best choice for advancing gay rights (at home and abroad).