Romney: "I'm Not Concerned About the Very Poor"

In a truly self-inflicted wound, Mitt Romney stated during an interview that he's "not concerned about the very poor." He claimed that the rest of his statement - i.e., that there's "safety net" for the very poor - mitigated the offensiveness and totally out of touch aspect of his statement. One can only wonder if Romney has ever meet anyone very poor or understands that most have NO health care and certainly not preventive health care access. Many Republicans, realizing the toxicity of Romney's remark, have tried to do damage control. Yet Romney's comments about lack of any concern for the poor exactly track the actions of the Republicans in Congress who have sought to slash programs for the poor - especially children. His comments also exactly track the actions of the Christian Right and Tea Party crowd who utterly disregard the Gospel message of selling one's property and giving to the poor. Talking Points Memo looks at the backlash that has arisen Here are some highlights:

Once again, Mitt Romney is on the defensive over his wealth on Wednesday after telling a CNN reporter that “I’m not concerned about the very poor, we have a safety net there.” And once again, pundits on the right are smacking their foreheads in amazement the usually controlled candidate can’t stop handing Democrats’ more “rich guy” gaffes.
“Facepalm,” Michelle Malkin wrote of the incident, which she said “could easily have been a Saturday Night Live parody” Over at the National Review, Jonah Goldberg said the quote raised concerns that Romney is “simply not a good enough politician” to beat Obama.
“There are plenty of things one could say to defend Romney on the merits of what he says here,” he wrote. “But great politicians on the morning after a big win, don’t force their supporters to go around defending the candidate from the charge that he doesn’t care about the poor. They just don’t.” “Romney’s ‘I’m not concerned with the very poor’ line may be the most idiotic thing a politician has ever said,” The Weekly Standard’s John McCormack tweeted.
RedState, whose bloggers have traditionally not been Romney fans, added their voices to the pile. According to co-founder Erick Erickson, Romney “played straight into the liberal caricature that Republicans don’t have hearts.” He added that “The issue here is not that Romney is right or wrong, but that he is handing choice sound bites to the Democrats to make him as unlikeable as he made Newt Gingrich.”
Still others were upset with Romney’s apparently sanguine take on the current state of entitlement spending on the poor. “The subtext of Romney’s comment is actually worse - that the safety net is the only answer the poor need,” conservative blogger Ben Domenech tweeted.

Romney may in fact be a decent person. But he is clearly totally out of touch with what life is like for average Americans, much less poor Americans. Remember this: Romney has filed an application with the city of La Jolla, California, to bulldoze his $12 million 3,009-square-foot, single-story ocean front home (pictured below) and replace it with a two-story, 11,062-square-foot structure. Oh, did I mention that this is one of SIX homes Romney owns? Again, the man is utterly out of touch with the reality most Americans live with and, if he was smart, he'd spend some time learning how the rest of us live. And, he might want to start supporting true charities rather than the Mormon Church and anti-gay organizations. 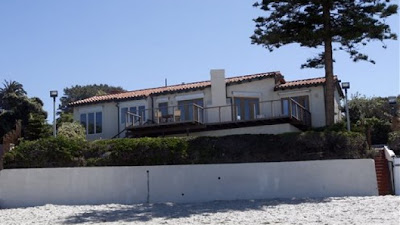 Posted by Michael-in-Norfolk at Wednesday, February 01, 2012