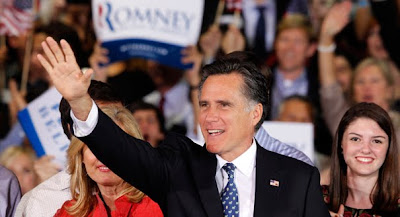 Mitt Romney - who as a number of blogs and news outlets have reported contributed to anti-gay organizations - has apparently won the Florida primary by a projected 16 percentage point margin - 47 percent to 31 percent against Newt Gingrich. The delusion gay hater, Rick Santorum was a distant third with 13 percent while Ron Paul is projected to garner 7 percent of the vote. Obviously, the big question now is what the losers will do. Logic and reason would suggest that Santorum drop out of the race, but logic and reason are not exactly Santorum's strong suits. As noted in an earlier post today, given Gingrish's egomania and delusions that he has a destiny in history, it's hard to predict what the serial adulterer will do next. Here are some excerpts from Politico:

Mitt Romney claimed a powerful victory in Florida’s presidential primary, reasserting himself as the frontrunner for his party’s nominationand leaving Newt Gingrich reeling from a likely double-digit defeat and facing an uncertain path to regaining his post-South Carolina momentum.

With 55 percent of precincts reporting, Romney led Gingrich by 16 percentage points, 47 percent to 31 percent. Rick Santorum was a distant third, with 13 percent, followed by Ron Paul with 7 percent.

Romney’s final victory margin may tighten as returns come in from Florida’s conservative western Panhandle. But with a majority of votes reported, Romney appeared on the brink of an important symbolic accomplishment: winning more votes than Gingrich and Santorum – the two would-be anti-Romney conservatives – combined.

That won’t put to rest questions about Romney’s ability to connect with and fire up the activist base of the Republican Party. It may, however, deprive his beleaguered opponents of a key argument they’ve used to explain their persistence in the race.

Romney won with both men and women and in every age and income group, according to network exit polls. He won a majority of white voters – 53 percent – and 44 percent of Latinos.

The only conspicuous bright spot for Gingrich was voters who described themselves as “very conservative,” who made up 33 percent of the electorate and broke for Gingrich over Romney, 43 percent to 29 percent.

Another Politico article looks at why Gingrich is not likely to drop from the contest and will continue the clown car demolition derby. Here are a few highlights::

Gingrich’s way forward depends as much as anything on his own frame of mind and whether he has the resiliency and determination to keep fighting in a race that’s slipping away. To continue clashing with a resurgent Mitt Romney is a psychological exercise for the former House speaker, on top of a political and tactical dilemma.

[W]ill Gingrich, if he badly loses a bruising Florida slugfest, still have the mettle to answer the bell? Without a doubt, say those who know him best. Even his most bitter enemies will grant that Gingrich has self-motivational skills — a natural abundance of chutzpah to some — to spare.

Having been repeatedly battered into near-defeat only to roar back into competition, Gingrich may have been inoculated against the disappointment of watching Romney overtake him in the polls in the Sunshine State.

Neither that nor the ever-lengthening list of prominent GOP officeholders supporting Romney has driven Gingrich to the point of personal despair in the last few difficult days on the trail in Florida. In some ways, it may even reinforce Gingrich’s view of himself as a Winston Churchill-like figure — a battle-scarred war horse, viewed as over the hill by his compatriots, riding to save his country at its moment of greatest peril.

“I would define Newt’s head space as: ‘Now this is not the end. It is not even the beginning of the end. But it is, perhaps, the end of the beginning,’” said David Lane, the Christian conservative leader close to Gingrich, quoting Churchill. “They’ve unloaded everything on him now.”