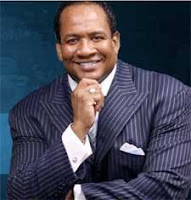 I have lamented frequently about the manner in which many black pastors are routinely co-opted to act as water carriers for white Christianist organization which, if one knows accurate history, are the successors to the same far right Christians who supported slavery in the 1850's and 1860's and who later supported the Jim Crow laws and segregation. Here in Virginia, the toxic bigots at The Family Foundation ("TFF") routinely manipulate black pastors to support TFF's anti-gay agenda as if they were trained circus dogs. It's disgusting not to mention an extreme dishonor of blacks who fought against these very same Christianist for equality under the nation's civil laws. Now, Alvin McEwen has a post at Pam's House Blend that speculates that these very same pastors such as Rev. Patrick Wooden (pictured at right) are perhaps being paid by the National Organization for Marriage ("NOM") to support NOM's anti-gay jihad. Here are highlights from Alvin's post:

A 2005 article on now disgraced Atlanta pastor Eddie Long highlights a disturbing perspective to this issue of the National Organization for Marriage utilizing the black church and leaders against marriage equality that very few people are openly talking about.

When I read the recent disgusting comments of Pastor Patrick Wooden and several other black ministers and leaders assembled by the NOM to combat marriage equality, I can’t help wondering if we are seeing a retread of this theory.

While I’m certainly not making pointed accusations, I have been amazed at how quickly and convenient these coalitions between NOM and several black pastors and leaders have come together. I have also been alarmed by the rhetoric. There seems to be a degree of unrestrained glee and vindictive pleasure in not only attacking marriage equality, dehumanizing the gay community, but also – particularly in Wooden’s case – going on a tangent about alleged gay sex acts.

These folks come across like well-paid hired guns. . . . . And in this case, we may be talking about NOM’s mysterious funds. Remember, the organization has fought tooth and nail to conceal not only how much it has, but also just who is footing the bill. Yet NOM spends that money like water, brazenly committing large sums of money to stop marriage equality in states like New Hampshire and Washington.

I am not the only lgbtq of color to have voiced this opinion. In the lgbtq of color community, there has been much talk and opinion-forming that these ministers and leaders who step out publicly to not only vilify marriage equality but verbally crucify the gay community in general aren’t exactly doing it solely on spiritual terms.

Again, I am merely speculating. However, if, when it’s all said and done, we find out that money has in fact been greasing some brown, very well manicured palms, lgbtqs of color won’t be surprised and we won’t be shocked. But we will say “we told you so.”

Candidly, in my personal opinion, there are few organizations more morally bankrupt and willing to engage in underhanded and dishonest behavior than the "godly Christian" set. It seems, in their minds, the means justify the end - i.e., the persecution and denigration of LGBT individuals - and no lie and no bribe is too big or distasteful for the Christianists. Indeed, they are the most immoral people one is likely to ever meet.