Have the Odds Improved to Defeat North Carolina's Anti-Gay Amendment? 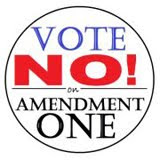 Watching the progress of the Christianist effort to pass an anti-gay marriage constitutional amendment in North Carolina has in some ways been a replay of what happened here in Virginia in 2006. The Christianists have used the same lies and underhanded tactics to dupe voters and if passed, the amendment would do far more than only bar "marriage" for same sex couples just as is the case in Virginia. Making matters worse, the vote on the amendment was set to take place on the date of the North Carolina primary in May. With no Democrat presidential primary, the anti-gay forces thought that the tactic would help insure passage since fewer Democrats and non-Christofascists would be likely to go to the polls. Now, fortuitously, a possible wrench has been thrown into the equation: the incumbent Democrat governor will not be seeking re-election and there will, therefore, be a primary contest for the governor slot on the Democrat ticket. WECT-TV 6 looks at this new factor. Here are highlights:

Democratic Gov. Beverly Perdue unexpectedly announced last Thursday that she won't seek re-election. That means more Democrats could turn out to the polls for the May 8 primary to pick a new candidate for governor.

"When the Republicans decided to use the primary election instead of the general election..they were probably thinking boy this is going to be a nice, quiet sleepy little election..not many folks are going to be showing up..this is going to be the time for us to try and get this passed," Michael Bitzer, a professor of politics at Catawba College said.

Now supporters of gay rights hope that an influx of Democratic voters could defeat the ban.

I sincerely hope that the voters in North Carolina vote against writing hate into that state's constitution.

Michael, I used to work for a State Senator in N.C., and still have some contacts there. Believe it or not, the Republicans wanted the issue on the ballot in November thinking it would help get their voters out to elect more Republicans over Democrats. For the same reason, it was the Democrats who pushed it to the primary, so the "values" voters would have less reason to come out in November. I'm a Democrat, so I'm not casting stones, just telling you how it was. In this case, the Dems were willing to throw us under the bus to help themselves in November.